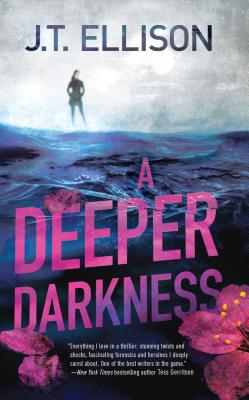 This is book number 1 in the Samantha Owens Novel series.

“Eleanor Donavon doesn't believe her son's death resulted from a car-jacking gone bad, so she asks his former girlfriend, medical examiner Samantha (Sam) Owens, to perform a second autopsy. When Sam discovers a link between Eddie Donavon and another murder victim, she is drawn into the investigation. As the death toll increases, so does the mystery, until not just Sam, but also Donavon's wife and children are at risk as well. Tightly plotted and often surprising, this story drew me in and wouldn't let go. A gem!”
— Keri Rojas, Cornerstone Cottage Kids, Hampton, IA

Discover where it all began in book one of J.T. Ellison's heart-racing Sam Owens series...

As a medical examiner, Samantha Owens knows her job is to make sense of death. But since the day the Tennessee floods took her husband and children, she has been pulled into a suffocating grief no amount of workaholic ardor can penetrate--until she receives a peculiar call from Washington, D.C.

On the other end of the line is an old boyfriend's mother, asking Sam to do a second autopsy on her son. Eddie Donovan is officially the victim of a vicious carjacking, but under Sam's sharp eye the forensics tell a darker story. The ex-Ranger was murdered, though not for his car. Forced to confront the burning memories and feelings about yet another loved one killed brutally, Sam loses herself in the mystery contained within Donovan's old notes. The tale told between the lines makes it clear that nobody's hands are clean, and that making sense of murder sometimes means putting yourself in the crosshairs of death.

J.T. Ellison is the bestselling author of the critically acclaimed Taylor Jackson series, with novels published in 21 countries. A former White House staffer, she moved to Nashville and began research on a passion: forensics and crime. She has worked extensively with the Metro Nashville Police, the FBI and various other law enforcement organizations to research her novels. Visit www.JTEllison.com or follow her on Twitter @Thrillerchick.

"A DEEPER DARKNESS is not only a compelling thriller but a multilayered meditation on grief and loss. Dr. Samantha Owens is a forensic investigator with heart and soul and this is the start of a most promising new series for rising star JT Ellison."-New York Times bestselling author Jeff Abbot

"Mystery fiction has a new name to watch."

"Ellison gets her Hitchcock on...just plain messing with her characters' heads until the superbly explosive end. Not to be missed!" – Lisa Gardner on Where All the Dead Lie

"Combines The Silence of the Lambs with The Wire."

-January Magazine on The Cold Room

"What J.T. Ellison has done with the city in her award-winning Taylor Jackson books is magnificent... Lovers of mystery and suspense fiction could not ask for more."

"Outstanding... The police procedural details never get in the way of the potent characterization and clever plotting, and Ellison systematically cranks up the intensity all the way to the riveting ending."

"Darkly compelling and thoroughly chilling, with rich characterization and a well-layered plot, All the Pretty Girls is everything a great crime thriller should be."