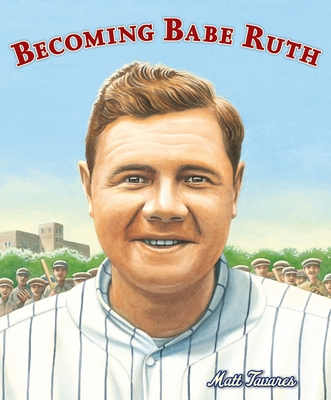 Matt Tavares’s striking homage to one of baseball’s legends offers a rare view into Babe Ruth’s formative years in “the House that built Ruth.”

Before he is known as the Babe, George Herman Ruth is just a boy who lives in Baltimore and gets into a lot of trouble. But when he turns seven, his father brings him to the gates of Saint Mary’s Industrial School for Boys, and his life is changed forever. At Saint Mary’s, he’s expected to study hard and follow a lot of rules. But there is one good thing about Saint Mary’s: almost every day, George gets to play baseball. Here, under the watchful eye of Brother Matthias, George evolves as a player and as a man, and when he sets off into the wild world of big-league baseball, the school, the boys, and Brother Matthias are never far from his heart. With vivid illustrations and clear affection for his subject, Matt Tavares sheds light on an icon who learned early that life is what you make of it — and sends home a message about honoring the place from which you came.
Back matter includes an author’s note, Babe Ruth’s career statistics, and a bibliography.

Matt Tavares is the author-illustrator of Zachary’s Ball, Oliver’s Game, Mudball, Henry Aaron’s Dream, and There Goes Ted Williams: The Greatest Hitter Who Ever Lived. He is also the illustrator of The Gingerbread Pirates by Kristin Kladstrup and Lady Liberty: A Biography by Doreen Rappaport, among other picture books. Matt Tavares lives in Ogunquit, Maine.

This is a story about the boy who became the man as much as it is about baseball...There is warmth and affection in Tavares’s paintings, which generously illustrate the text, often in immersive spreads.
—The New York Times

Tavares brings the well-paced story to a nice close as the now-world-famous Babe returns to Saint Mary’s to put on an impromptu slugging exhibition for the boys, similar to the ones Brother Matthias gave that so enchanted George as a boy. It’s a lovely, poignant ending to a standout sports picture book biography.
—The Horn Book

How can an author make the umpteenth picture book about Babe Ruth justify its shelf space? By finding the right angle on the legend and trimming the larger-than-life figure down to a guy a kid might want to shake hands with...Though subtle in color, Tavares’ illustrations are often big and brash in composition, with plenty of close-ups of a beaming Babe.
—Bulletin of the Center for Children's Books

An homage to the Bambino introduces a new audience to this great legend of baseball...Tavares allows young readers to view Ruth with just the right amount of hero worship and awe.
—Kirkus Reviews

Characteristic of Tavares’s attractive painterly style, the watercolor, gouache, and pencil illustrations stand out with their action-packed scenes, dramatic angles, and the full-spread portrait of Ruth...Readers, both baseball fans and others, will enjoy this story of the athlete’s gratitude and thankfulness for learning his lifetime sport.
—School Library Journal

Everything about this picture book biography will engage the child reader.
—Library Media Connection