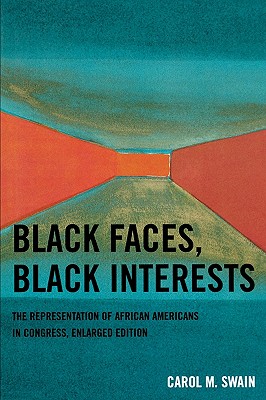 By Carol M. Swain
Email or call for price

Winner of the Woodrow Wilson Foundation Award from the American Political Science Association; the D.B. Hardeman Prize for the best scholarly work on Congress from the Lyndon Baines Johnson Foundation; and co-winner of the V.O. Key Award from the Southern Political Science Association; Selected by Library Choice Journal as one of seven "Outstanding Academic Books of 1994" Through analysis of both black and white members of Congress, Black Faces, Black Interests challenges the proposition that only African Americans can represent black interests effectively and argues for black and white representatives to form coalitions to better serve their constituents. Since its publication in 1993, this book has been cited three times by the U.S. Supreme Court and has spawned numerous studies of minority representation. This enlarged edition features a new chapter entitled "Black Congressional Representation since 1992.

Carol M. Swain is Professor of Political Science and Law at Vanderbilt University. Dr. Swain's most recent books include The New White Nationalism in America: Its Challenge to Integration, which was nominated for a Pulitzer Prize, and its edited companion Contemporary Voices of White Nationalism.