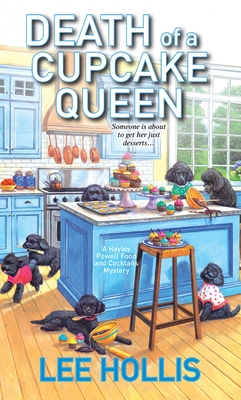 This is book number 6 in the Hayley Powell Mystery series.

As the food and cocktails columnist for the Island Times, Hayley Powell attends a lot of events—but this one will be murder…

On the eve of her high school reunion, Hayley dreads seeing the trio of mean girls who used to torment her: Sabrina Merryweather, Nykki Temple, and former prom queen Ivy Foster. These days Ivy wears a different crown as the cupcake queen—and flaunting her success is just the icing on the cake.

But maybe the prom queen should have been voted Most Likely to Die. At the reunion, Ivy is found murdered, cupcakes scattered around her. Is a killer out to teach the mean girls a lesson? As Hayley tries to get the scoop, she’ll have to be careful…or someone may be writing this columnist’s obituary next.

Includes seven delectable recipes from Hayley’s kitchen!
Lee Hollis is the pen name for a brother and sister writing team. Rick Copp is a veteran Hollywood writer/producer and also the author of three other mystery novel series under his own name and Lee Hollis. He lives in Palm Springs, CA. Holly Simason is an award-winning food and cocktails columnist who lives in North Carolina. You can follow them on Facebook (Lee Hollis), Twitter (@leehollisbooks), and Instagram (leehollisbooks).
Praise for Death of a Chocoholic