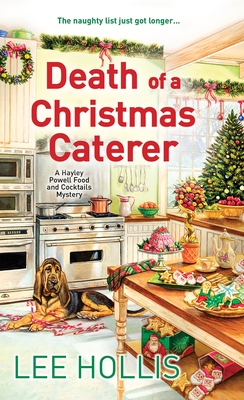 This is book number 5 in the Hayley Powell Mystery series.

Who better than food and cocktails columnist Hayley Powell to book a caterer for the Island Times holiday party? But Hayley's quest for a cook turns into the pursuit of a killer who caters to no one. . .

Office Christmas parties can sometimes mean career suicide--but they rarely lead to murder. Hayley thought Garth Rawlings would be the perfect caterer for this year's bash, but when the gourmet sees her budget, he goes galloping.

Unfortunately his run is short-lived. Garth is found dead on the floor of his kitchen, with his delectable creations burning in the oven. Faced with a spread of suspects, Hayley is determined to discover who would want to take out the Christmas caterer, because--no matter what the season--justice must be served. . .

Praise for Death of a Coupon Clipper

"Hayley is a likable heroine that readers will cheer for as she manages to save the day and pay her bills." --Parkersburg News and Sentinel
Lee Hollis is the pen name for a brother and sister writing team. Rick Copp is a veteran Hollywood writer/producer and also the author of three other mystery novel series under his own name and Lee Hollis. He lives in Palm Springs, CA. Holly Simason is an award-winning food and cocktails columnist who lives in North Carolina. You can follow them on Facebook (Lee Hollis), Twitter (@leehollisbooks), and Instagram (leehollisbooks).