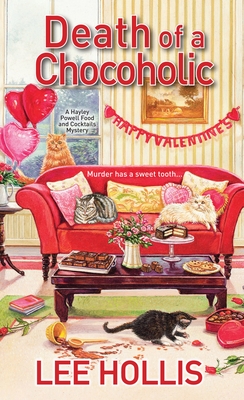 This is book number 4 in the Hayley Powell Mystery series.

Food and cocktails columnist Hayley Powell is not looking for love this Valentine's Day. Of course she also isn't planning on looking for a murderer. . .

Fed up with dating after a disastrous setup, the only thing Hayley wants to snuggle up to is a box of made-to-order chocolates from plus-sized, plus-mouthed chocolatier Bessie Winthrop. But when Bessie is found dead in her kitchen, only Hayley suspects that Bessie's "heart attack" might actually be a candy-coated murder.

Turns out Bessie had more enemies than a boxful of chocolates, each one a suspicious flavor. It's sticky business juggling a job, two teenagers and finding a killer, but it's better than letting a killer find Hayley first. . .

Praise for Death of a Country Fried Redneck

"Snappy pace, fun characters, and a clever plot. A tasty entrée for the culinary cozy crowd." --Library Journal
Lee Hollis is the pen name for a brother and sister writing team. Rick Copp is a veteran Hollywood writer/producer and also the author of three other mystery novel series under his own name and Lee Hollis. He lives in Palm Springs, CA. Holly Simason is an award-winning food and cocktails columnist who lives in North Carolina. You can follow them on Facebook (Lee Hollis), Twitter (@leehollisbooks), and Instagram (leehollisbooks).