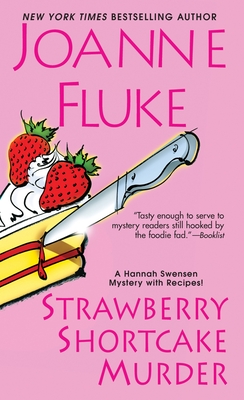 This is book number 2 in the A Hannah Swensen Mystery series.

In her debut mystery, Chocolate Chip Cookie Murder, intrepid amateur sleuth and bakery owner Hannah Swensen proved that when it comes to crime, nothing is sweeter than a woman who knows how to really mix it up. Now, the flame-haired, tart-talking (and baking) heroine is back, judging a contest where the competition is really murder.

Between perfecting her Cheddar Cheese Apple Pie and Chocolate Crunchies, Hannah's snooping into the coach's private life and not coming up short on suspects. And could Watson's harsh criticism during the judging have given one of the contestants a license to kill? The stakes are rising faster than dough, and Hannah will have to be very careful, because somebody is cooking up a recipe for murder. . .with Hannah landing on the "necessary ingredients" list.


"Another delicious adventure. . .a superior cozy sure to leave readers satisfied. . .but hungry for more." --Publishers Weekly


Includes seven delicious recipes!
JOANNE FLUKE is the New York Times bestselling author of the Hannah Swensen mysteries, which include Double Fudge Brownie Murder, Blackberry Pie Murder, Cinnamon Roll Murder, and the book that started it all, Chocolate Chip Cookie Murder. That first installment in the series premiered as Murder, She Baked:  A Chocolate Chip Cookie Mystery on the Hallmark Movies & Mysteries Channel. Like Hannah Swensen, Joanne Fluke was born and raised in a small town in rural Minnesota, but now lives in Southern California. Please visit her online at www.JoanneFluke.com