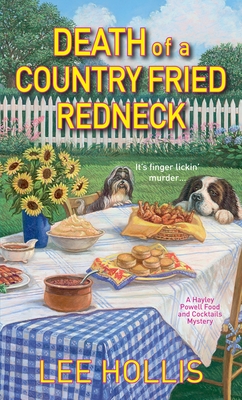 This is book number 2 in the Hayley Powell Mystery series.

As a single mom, Hayley Powell already has a full plate--she's got deadlines to make and a teenage daughter with eyes for an aspiring singer-songwriter. But when country music superstar Wade Springer rolls into town, Hayley spies an irresistible side gig: personal chef to her all-American idol. After he tries her home cooking, Wade's so impressed that he hires her on the spot--and invites her to dine with him alone.

Hayley and Wade are hitting all the right notes. . .until a body turns up. Wade's tour bus was torched overnight and a roadie named Mickey Pritchett came out well-done. But the real cause of death isn't barbecue: Mickey was shot, his mouth stuffed with one of Hayley's trademark chicken legs. An ornery drunk, Mickey had already made plenty of enemies in town, but Wade's reputation is on the rocks. Hayley reckons it's up to her to settle this mess--a charbroiled mystery with all the fixin's.

Praise for Death of a Kitchen Diva

"Readers will be calling for a second round from author Lee Hollis." --Leslie Meier, author of Chocolate Covered Murder
Lee Hollis is the pen name for a brother and sister writing team. Rick Copp is a veteran Hollywood writer/producer and also the author of three other mystery novel series under his own name and Lee Hollis. He lives in Palm Springs, CA. Holly Simason is an award-winning food and cocktails columnist who lives in North Carolina. You can follow them on Facebook (Lee Hollis), Twitter (@leehollisbooks), and Instagram (leehollisbooks).