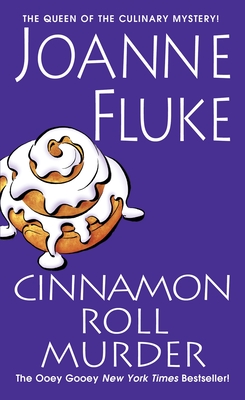 This is book number 15 in the A Hannah Swensen Mystery series.

April is a busy time for Hannah Swensen and her bakery; the warm weather makes folks in Lake Eden, Minnesota, go wild for something sweet. When Hannah hears that the Cinnamon Roll Six jazz band will be playing at the town's Weekend Jazz Festival, she's more than happy to bake up a generous supply of their namesake confections to welcome the band to town.

Before the festival even begins, tragedy strikes when the tour bus overturns. Among those injured is Buddy Neiman, the band's beloved keyboard player. Buddy's injuries appear minor, until his condition suddenly takes a turn for the worse--as in dead. Hannah's no doctor, but she suspects that the surgical scissors someone plunged into Buddy's chest may have something to do with it. Hannah isn't sure just how she'll unravel the mystery, but one thing's for sure: nothing's sweeter than bringing a killer to justice. . .

"Fans of this wildly popular series will not be disappointed. Fluke has kept this series strong for a long time, and there is still plenty to enjoy for foodie crime fans." --Booklist
JOANNE FLUKE is the New York Times bestselling author of the Hannah Swensen mysteries, which include Double Fudge Brownie Murder, Blackberry Pie Murder, Cinnamon Roll Murder, and the book that started it all, Chocolate Chip Cookie Murder. That first installment in the series premiered as Murder, She Baked:  A Chocolate Chip Cookie Mystery on the Hallmark Movies & Mysteries Channel. Like Hannah Swensen, Joanne Fluke was born and raised in a small town in rural Minnesota, but now lives in Southern California. Please visit her online at www.JoanneFluke.com