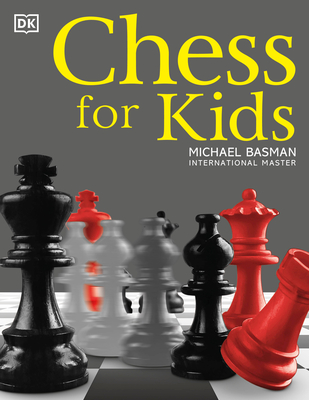 
Usually Ships in 3-7 Days
Master one of the world’s most fascinating games — chess!

Learn how to play chess through this fun, illustrated chess guide! A board game like no other, chess challenges young minds to think strategically about moves by applying the principles of chess to their club games, tournaments and championships.

Take your skills even further by gaining a deeper appreciation for the aim of the game and tactics. The chess book for kids age 9 and older includes:

• Chessboard graphics that show how to apply the principles you learn in real-life game situations
• A breakdown of the value, importance and role of each piece
• A history section provides background on the game and its origins, reflecting the latest changes in the game and how it’s played

International chess master and tutor Michael Basman show you everything you need to know to improve your tactics and win more games. Go from beginner chess player to chess champion by following the expert advice in Chess for Kids. Soon you’ll know the difference between chess pieces (your bishop from your knight!) and how to use them strategically, when to use the castling move and how to counter the Queen’s Gambit.

Dive into the history of chess and learn from the greatest players and games. Before explaining techniques, the book builds your fundamental knowledge of chess and boosts your understanding of its value, power and importance. Chessboard graphics illustrate different scenarios so you can visualize different chess moves and their potential outcomes and learn the best move to make in any given situation.
Michael Basman became hooked on chess at the age of ten and has been playing ever since. He has taken part in several olympiads and, in 1973, swept the board at the British Chess Championships. Since becoming an International Master in 1981, he has dedicated his time to teaching schoolchildren and, in 1996, set up the UK Schools' Chess Challenge, an annual event that attracts thousands of new players each year.