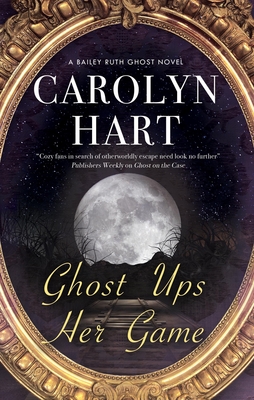 This is book number 9 in the Bailey Ruth Ghost Novel series.

New York Times bestselling author Carolyn Hart's warm-hearted sleuth returns in the ninth Bailey Ruth Ghost Novel, with a case that will test even her Heavenly powers After a busy morning dispatching emissaries from Heaven's Department of Good Intentions to those in need, Bailey Ruth Raeburn is feeling flush with success. So when an urgent call for help comes through from her old hometown, she can't resist taking on the mission herself. After all, what could go wrong? With the shouted warning of her boss, Wiggins - Irregular Problematic - ringing in her ears, she arrives to face a shocking scene: Professor Iris Gallagher leaning over the corpse of her colleague Matt Lambert, the murder weapon clutched in her hand. Bailey Ruth is only sent to help the innocent, but things are looking very black for Iris. With Wiggins breathing down her neck, and her old friend Police Chief Sam Cobb casting doubt on her every theory, Bailey Ruth must uncover the truth - or this could be the last trip to earth she's ever allowed to make.
Grand Master of Mystery Carolyn Hart is the New York Times bestselling author of over sixty novels of mystery and suspense, including the Death on Demand, Henrie O and Bailey Ruth series. Her books have won numerous prizes, including Agathas, Anthonys and Macavitys, and she has been personally honoured with the Lifetime Achievement Award from Malice Domestic and the Ridley Pearson Award for significant contributions to the mystery field. One of the founding members of Sisters in Crime, Hart lives in Tulsa and enjoys the company of a sweet brown tabby.