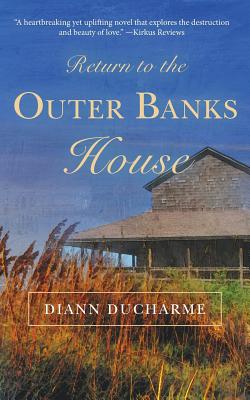 She was the spirited daughter of a North Carolina plantation owner, and he was a poor fisherman who she tutored on the porch of her family's Nags Head cottage. When we last saw Abigail Sinclair and Ben Whimble at the close of The Outer Banks House, they'd overcome their differences in life stations and defied convention to begin their new life together.

But now it's seven years later, and Return to the Outer Banks House finds the couple married and in hard times-riddled by poverty, miscarriages, and weakened family ties. The strong bonds that once held them together have eroded over time, and their marriage threatens to unravel, particularly when relationships from the past and ambitions for the future find their way into the mismatched couple's present predicament.

Can their love survive? Or are the challenges they face insurmountable? Return to the Outer Banks House carries readers back to 1875 to answer these questions and explore the ebb and flow of a rocky marriage set against the enchanting North Carolina shoreline. Replete with history, intrigue, and plenty of maritime drama, it's an evocative tale of struggle in the Reconstruction-era South.

Diann Ducharme holds a bachelor's degree in English literature from the University of Virginia and a master's degree in teaching from Virginia Commonwealth University. A native of Newport News, Virginia, she has vacationed on the Outer Banks of North Carolina all of her life and has used this familiar setting as a backdrop for her writing. Ducharme's literary debut, The Outer Banks House, was published in 2010, her second novel Chasing Eternity in 2012, and the highly anticipated Return to the Outer Banks House in 2014. Ducharme currently resides in Manakin-Sabot, Virginia, with her husband, Sean, their three beach-loving children, and their energetic border collie, Toby.