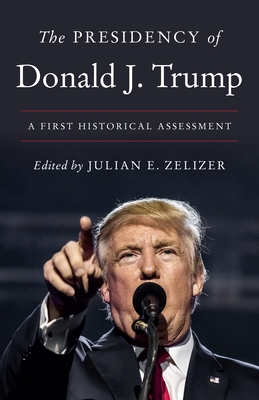 The Presidency of Donald J. Trump presents a first draft of history by offering needed perspective on one of the nation's most divisive presidencies. Acclaimed political historian Julian Zelizer brings together many of today's top scholars to provide balanced and strikingly original assessments of the major issues that shaped the Trump presidency. When Trump took office in 2017, he quickly carved out a loyal base within an increasingly radicalized Republican Party, dominated the news cycle with an endless stream of controversies, and presided over one of the most contentious one-term presidencies in American history. These essays cover the crucial aspects of Trump's time in office, including his administration's close relationship with conservative media, his war on feminism, the solidification of a conservative women's movement, his response to COVID-19, the border wall, growing tensions with China and NATO allies, white nationalism in an era of Black Lives Matter, and how the high-tech sector flourished. The Presidency of Donald J. Trump reveals how Trump was not the cause of the political divisions that defined his term in office but rather was a product of long-term trends in Republican politics and American polarization more broadly. With contributions by Kathleen Belew, Angus Burgin, Geraldo Cadava, Merlin Chowkwanyun, Bathsheba Demuth, Gregory Downs, Jeffrey Engel, Beverly Gage, Nicole Hemmer, Michael Kazin, Daniel C. Kurtzer, James Mann, Mae Ngai, Margaret O'Mara, Jason Scott Smith, Keeanga-Yamahtta Taylor, and Leandra Zarnow.
Julian E. Zelizer is the Malcolm Stevenson Forbes, Class of 1941 Professor of History and Public Affairs at Princeton University. A CNN political analyst and a regular guest on NPR, he is the author of many books, including Burning Down the House, The Fierce Urgency of Now, and Abraham Joshua Heschel: A Life of Radical Amazement. Twitter @julianzelizer