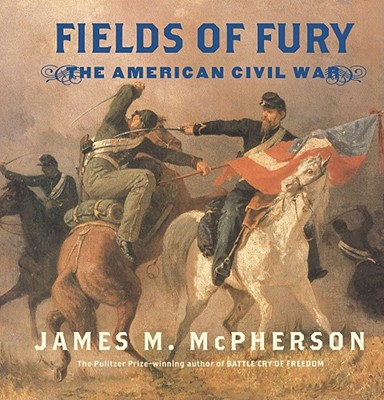 
Usually Ships in 3-7 Days
Pulitzer Prize award-winning historian James M. McPherson has written for young readers a stirring account of the greatest conflict to happen on our nation's soil, the Civil War, bringing to life the tragic struggle that divided not only a nation, but also friends and family. From the initial Confederate attack on Fort Sumter, to the devastating loss of life at Shiloh as Ulysses S. Grant led the Union to unexpected victory, to the brilliance of Stonewall Jackson's campaign at Shenandoah, to General Pickett's famous charge at Gettysburg, to the Union's triumph at Appo-mattox Court House, Fields of Fury details the war that helped shape us as a nation.
Also included are personal anecdotes from the soldiers at the battlefront and the civilians at home, as well as profiles of historical luminaries such as Robert E. Lee, Abraham Lincoln, Jefferson Davis, and Ulysses S. Grant. McPherson also explores the varied roles that women played during the war, healthcare on the battlefield, and the demise of slavery.
McPherson's narrative is highlighted with black-and-white photographs taken by Civil War photographers Mathew Brady and Timothy O'Sullivan, period oil paintings, and key campaign and battlefield maps, that make Fields of Fury the consummate book on the American Civil War for kids.
James M. McPherson, PhD, an American history expert and one of the most distinguished historians of our time, was awarded the Pulitzer Prize in 1989 for Battle Cry of Freedom: The Civil War Era. His other bestselling books include For Cause and Comrades: Why Men Fought in the Civil War, Drawn with the Sword: Reflections on the American Civil War, What They Fought For, 1861-1865; Gettysburg: The Paintings of Mort Kunstler, Abraham Lincoln and the Second American Revolution; and Fields of Fury. An active preservationist, he has served on the Civil War Sites Advisory Commission since 1991. Dr. McPherson was named the Jefferson Lecturer in the Humanities for 2000 by the National Endowment for the Humanities. A professor at Princeton University, he lives in Princeton, New Jersey.