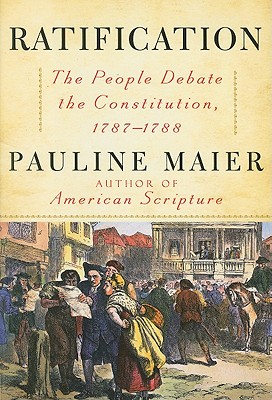 By Pauline Maier
Email or call for price
Hard to Find

From the distinguished historian of Revolutionary-era America and author of the acclaimed American Scripture comes this fresh and surprising account of a pivotal moment in American history—the ratification of the Constitution.

When the delegates left the Constitutional Convention in Philadelphia in September 1787, the new Constitution they had written was no more than a proposal. Elected conventions in at least nine of the thirteen states would have to ratify it before it could take effect. There was reason to doubt whether that would happen. The document we revere today as the foundation of our country’s laws, the cornerstone of our legal system, was hotly disputed at the time. Some Americans denounced the Constitution for threatening the liberty that Americans had won at great cost in the Revolutionary War. One group of fiercely patriotic opponents even burned the document in a raucous public demonstration on the Fourth of July.

In this splendid new history, Pauline Maier tells the dramatic story of the yearlong battle over ratification that brought such famous founders as Washington, Hamilton, Madison, Jay, and Henry together with less well-known Americans who sometimes eloquently and always passionately expressed their hopes and fears for their new country. Men argued in taverns and coffeehouses; women joined the debate in their parlors; broadsides and newspaper stories advocated various points of view and excoriated others. In small towns and counties across the country people read the document carefully and knew it well. Americans seized the opportunity to play a role in shaping the new nation. Then the ratifying conventions chosen by “We the People” scrutinized and debated the Constitution clause by clause.

Although many books have been written about the Constitutional Convention, this is the first major history of ratification. It draws on a vast new collection of documents and tells the story with masterful attention to detail in a dynamic narrative. Each state’s experience was different, and Maier gives each its due even as she focuses on the four critical states of Pennsylvania, Massachusetts, Virginia, and New York, whose approval of the Constitution was crucial to its success.

The New Yorker Gilbert Livingston called his participation in the ratification convention the greatest transaction of his life. The hundreds of delegates to the ratifying conventions took their responsibility seriously, and their careful inspection of the Constitution can tell us much today about a document whose meaning continues to be subject to interpretation. Ratification is the story of the founding drama of our nation, superbly told in a history that transports readers back more than two centuries to reveal the convictions and aspirations on which our country was built.

Pauline Maier is the William R. Kenan, Jr. Professor of American History at M.I.T. She received her PhD from Harvard University in 1968. She is the author of several books and textbooks on American history, including From Resistance to Revolution: Colonial Radicals and the Development of American Opposition to Britain, 1765-1776, The Old Revolutionaries: Political Lives in the Age of Samuel Adams, and American Scripture, which was on the New York Times Book Review "Editor's Choice" list of the best 11 books of 1997 and a finalist in General Nonfiction for the National Book Critics' Circle Award. She lives in Cambridge, Massachusetts.

“The ratification of the Constitution was the most comprehensive and consequential political debate in American history. It is quite amazing that the story has never before been told with the knowledge and flair it deserves. Here Pauline Maier, one of the leading historians of the revolutionary era, at the peak of her powers, tells that story with style, wit, and incomparable mastery of the sources.”

“Pauline Maier has written a magnificent, comprehensive account of the political contests by which the people of America, in James Madison’s words, breathed ‘life and validity’ into the United States Constitution. Her book will stand as the definitive account of the story of the ratification of the Constitution for many decades to come.”

--Richard R. Beeman, professor of history, University of Pennsylvania, and author of Plain, Honest Men: The Making of the American Constitution

“With the confidence of a master, Pauline Maier has told the story of the ratification of the Constitution in a book that will endure for decades.”

--Joyce Appleby, author of Inheriting the Revolution: The First Generation of Americans

“[Pauline Maier] brilliantly tracks the fight over the Constitution’s ratification. . . . A scrupulously even-handed presentation based on impressive scholarship.”

“The adoption of the Constitution in 1787-1788 was the first great stroke of popular democracy in America, and perhaps its most successful and momentous as well. Yet surprisingly, the full story of ratification has never been told. Now, at long last, Pauline Maier’s sweeping account of ratification brilliantly describes how this great event took place.”
—Jack N. Rakove, author of Original Meanings: Politics and Ideas in the Making of the Constitution

“I can’t imagine a better subject for Pauline Maier’s storytelling skills than the statewide debates over whether to ratify the U.S. Constitution. Never before or since has such a broad cross-section of Americans addressed such fundamental issues of government. Maier follows the debate beyond the legislative chambers into the taverns and homes of ordinary Americans as they made their momentous decision.”

—Woody Holton, author of Abigail Adams and Unruly Americans and the Origins of the Constitution