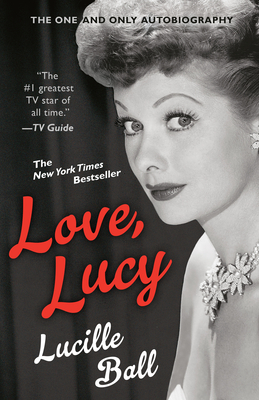 
Not Yet Published
THE NEW YORK TIMES BESTSELLER

The one and only autobiography by the iconic Lucille Ball, hailed by TV Guide as the “#1 Greatest TV Star of All Time.”

Love, Lucy is the valentine Lucille Ball left for her fans—a warm, wise, and witty memoir written by Lucy herself. The legendary star of the classic sitcom I Love Lucy was at the pinnacle of her success when she sat down to record the story of her life. No comedienne had made America laugh so hard, no television actress had made the leap from radio and B movies to become one of the world's best-loved performers. This is her story—in her own words.

The story of the ingenue from Jamestown, New York, determined to go to Broadway, destined to make a big splash, bound to marry her Valentino, Desi Arnaz. In her own inimitable style, she tells of their life together—both storybook and turbulent; intimate memories of their children and friends; wonderful backstage anecdotes; the empire they founded; the dissolution of their marriage. And, with a heartfelt happy ending, her enduring marriage to Gary Morton.

“The comic actress in her own words...intensley moving.”—San Francisco Chronicle

“Filled with light and laughter.”—New York Times Book Review
Lucille Ball (1911–1989) was a beloved actress, comedienne, and Hollywood icon. Best known for her eponymous role in the hit 1950s TV sitcom I Love Lucy, she also starred in radio shows and appeared in dozens of films and television shows throughout her career, winning numerous awards, including multiple Emmy Awards, the Golden Globe Cecil B. DeMille Award, and in 1987 the Lifetime Achievement Award in Comedy from the American Comedy Awards.

“We watched her, we loved her...Lucy fans will find the book fascinating.”—Detroit News

“A warm, conversational memoir...Lucille Ball died in 1989, so it's a shock to hear the gleeful, guiless voice of ‘America’s favorite redhead’ ring out with such vitality in an autobiography.”—The New York Times Book Review

“An extremely interesting memoir...It’s a way to discover first hand what was most important to Lucy—like Desi, her mother, her family and kids, the career, her mentor Lela Rogers—and what was not. She was the geniuine article. So is this book.”—Robert Osborne, The Hollywood Reporter