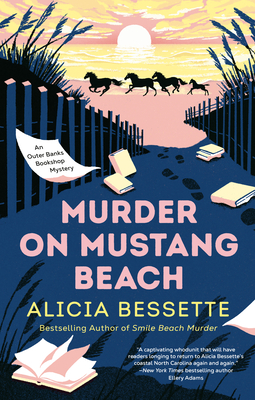 This is book number 2 in the Outer Banks Bookshop Mystery series.

When a killer stirs up trouble in the Outer Banks, amateur sleuth and bookseller Callie Padget is on the case, in a new beachside mystery from author Alicia Bessette.

Cattail Island in the Outer Banks is a popular destination for honeymooners and nature lovers alike. So it is a huge blow when the murder of a newlywed grinds the pre-summer season to a screeching halt. Bookseller Callie Padget launches her own investigation, after mysterious customer Geri-Lynn Humfeld, caretaker of the island’s protected wild horses, brings in an irresistible piece of information.

Determined to restore order and safety to her beloved hometown, Callie searches for answers—even as those answers cast suspicion on her soon-to-be boyfriend, Toby Dodge, whose martial arts studio was the scene of the crime. As she digs deeper, Toby becomes the police’s prime suspect. The truth raises troubling questions and sends her scouring the bookshop’s shelves for guidance.

Meanwhile, a well-loved member of the mustang herd—a pregnant mare whose anticipated foal is a symbol of summery hope for locals and visitors alike—may be facing dire circumstances. With help from Geri-Lynn, Callie unearths startling secrets surrounding not only the compromised mare, but the murdered newlywed, too. And when another body shows up, this time on isolated Mustang Beach, she must race against time to stop a killer from claiming any more innocent lives.
Before authoring the Outer Banks Bookshop Mysteries, Alicia Bessette worked as a reporter in her home state of Massachusetts, where her writing won a first-place award from the New England Newspaper & Press Association. A pianist, published poet, and enthusiastic bird-watcher, she now loves living in coastal North Carolina with her husband, novelist Matthew Quick.