A Dark and Stormy Tea (A Tea Shop Mystery #24) (Hardcover) 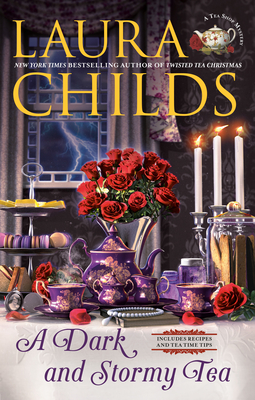 A Dark and Stormy Tea (A Tea Shop Mystery #24) (Hardcover)

This is book number 24 in the A Tea Shop Mystery series.

A possible serial killer on the loose sends tea maven Theodosia Browning into a whirlwind of investigation in this latest installment of the New York Times bestselling series.

It was a dark and stormy night, but that was the least of Theodosia Browning's troubles. As she approaches St. Philips Graveyard, Theodosia sees two figures locked in a strange embrace. Wiping rain from her eyes, Theodosia realizes she has just witnessed a brutal murder and sees a dark-hooded figure slip away into the fog.

In the throes of alerting police, Theodosia recognizes the victim—it is the daughter of her friend, Lois, who owns the Antiquarian Bookshop next door to her own Indigo Tea Shop.

Even though this appears to be the work of a serial killer who is stalking the back alleys of Charleston, Lois begs Theodosia for help. Against the advice of her boyfriend, Detective Pete Riley, and the sage words of Drayton, her tea sommelier, amateur-sleuth Theodosia launches her own shadow investigation. And quickly discovers that suspects abound with the dead girl’s boyfriend, nefarious real estate developer, private-security man, bumbling reporter, and her own neighbor who is writing a true-crime book and searching for a big ending.

INCLUDES DELICIOUS RECIPES AND TEA TIME TIPS!
Laura Childs is the New York Times bestselling author of the Tea Shop Mysteries, New Orleans Scrapbooking Mysteries, and Cackleberry Club Mysteries. In her previous life she was CEO of her own marketing firm, authored several screenplays, and produced a reality TV show.

“A delight for mystery mavens and foodies, with Charleston providing the suitably spooky background.”—Kirkus Reviews