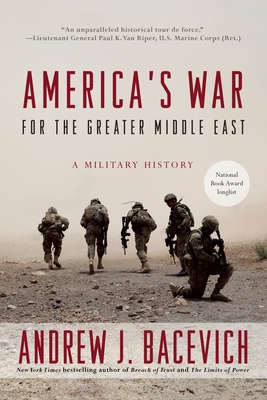 LONGLISTED FOR THE NATIONAL BOOK AWARD • A searing reassessment of U.S. military policy in the Middle East over the past four decades from retired army colonel and New York Times bestselling author Andrew J. Bacevich, with a new afterword by the author

From the end of World War II until 1980, virtually no American soldiers were killed in action while serving in the Greater Middle East. Since 1990, virtually no American soldiers have been killed in action anywhere else. What caused this shift? Andrew J. Bacevich, one of the country’s most respected voices on foreign affairs, offers an incisive critical history of this ongoing military enterprise—now more than thirty years old and with no end in sight.

During the 1980s, Bacevich argues, a great transition occurred. As the Cold War wound down, the United States initiated a new conflict—a War for the Greater Middle East—that continues to the present day. The long twilight struggle with the Soviet Union had involved only occasional and sporadic fighting. But as this new war unfolded, hostilities became persistent. From the Balkans and East Africa to the Persian Gulf and Central Asia, U.S. forces embarked upon a seemingly endless series of campaigns across the Islamic world. Few achieved anything remotely like conclusive success. Instead, actions undertaken with expectations of promoting peace and stability produced just the opposite. As a consequence, phrases like “permanent war” and “open-ended war” have become part of everyday discourse.

Connecting the dots in a way no other historian has done before, Bacevich weaves a compelling narrative out of episodes as varied as the Beirut bombing of 1983, the Mogadishu firefight of 1993, the invasion of Iraq in 2003, and the rise of ISIS in the present decade. Understanding what America’s costly military exertions have wrought requires seeing these seemingly discrete events as parts of a single war. It also requires identifying the errors of judgment made by political leaders in both parties and by senior military officers who share responsibility for what has become a monumental march to folly. This Bacevich unflinchingly does.

A twenty-year army veteran who served in Vietnam, Andrew J. Bacevich brings the full weight of his expertise to this vitally important subject. America’s War for the Greater Middle East is a bracing after-action report from the front lines of history. It will fundamentally change the way we view America’s engagement in the world’s most volatile region.

Praise for America’s War for the Greater Middle East

“Bacevich is thought-provoking, profane and fearless. . . . [His] call for Americans to rethink their nation’s militarized approach to the Middle East is incisive, urgent and essential.”—The New York Times Book Review

“Bacevich’s magnum opus . . . a deft and rhythmic polemic aimed at America’s failures in the Middle East from the end of Jimmy Carter’s presidency to the present.”—Robert D. Kaplan, The Wall Street Journal

“A critical review of American policy and military involvement . . . Those familiar with Bacevich’s work will recognize the clarity of expression, the devastating directness and the coruscating wit that characterize the writing of one of the most articulate and incisive living critics of American foreign policy.”—The Washington Post

Andrew J. Bacevich is a retired professor of history and international relations at Boston University. A graduate of the U.S. Military Academy, he served for twenty-three years as a commissioned officer in the United States Army. He received his PhD in American diplomatic history from Princeton. Before joining the faculty of Boston University in 1998, he taught at West Point and at Johns Hopkins University. His three most recent books—Breach of Trust, Washington Rules, and The Limits of Power—all hit the New York Times bestseller list. A winner of the Lannan Notable Book Award, he lectures frequently at universities around the country. He lives with his wife, Nancy, in Walpole, Massachusetts.

“[Andrew J.] Bacevich is thought-provoking, profane and fearless. . . . [His] call for Americans to rethink their nation’s militarized approach to the Middle East is incisive, urgent and essential.”—The New York Times Book Review

“Bacevich’s magnum opus . . . a deft and rhythmic polemic aimed at America’s failures in the Middle East from the end of Jimmy Carter’s presidency to the present.”—Robert D. Kaplan, The Wall Street Journal

“A critical review of American policy and military involvement . . . Those familiar with Bacevich’s work will recognize the clarity of expression, the devastating directness and the coruscating wit that characterize the writing of one of the most articulate and incisive living critics of American foreign policy.”—The Washington Post

“[A] monumental new work . . . One of the grim and eerie wonders of his book is the way in which just about every wrongheaded thing Washington did in that region in the fourteen-plus years since 9/11 had its surprising precursor in the two decades of American war there before the World Trade Center towers came down.”—The Huffington Post

“The book reveals a number of critical truths, exposing deep flaws that have persisted for decades in American strategic thinking—flaws that have led successive American presidents to ask the American military to accomplish the impossible, often while barely providing it with the resources to accomplish even the most modest of goals. . . . Read Bacevich—not for the solutions he proposes but to be sobered by the challenge.”—National Review

“In one arresting book after another, Andrew J. Bacevich has relentlessly laid bare the failings of American foreign policy since the Cold War. This one is his sad crowning achievement: the story of our long and growing military entanglement in the region of the most tragic, bitter, and intractable of conflicts.”—Richard K. Betts, director, Saltzman Institute of War and Peace Studies, Columbia University

“Andrew Bacevich offers the reader an unparalleled historical tour de force in a book that is certain to affect the formation of future U.S. foreign policy and any consequent decisions to employ military force. He presents sobering evidence that for nearly four decades the nation’s leaders have demonstrated ineptitude at nearly every turn as they shaped and attempted to implement Middle East policy. Every citizen aspiring to high office needs not only to read but to study and learn from this important book. This is one of the most serious and essential books I have read in more than half a century of public service.”—Lieutenant General Paul K. Van Riper, U.S. Marine Corps (Ret.)

“Bacevich asks and answers a provocative, inconvenient question: In a multigenerational war in the Middle East, ‘Why has the world’s mightiest military achieved so little?’ ”—Graham Allison, director, Belfer Center for Science and International Affairs, and Douglas Dillon Professor of Government at Harvard’s John F. Kennedy School of Government

“Andrew Bacevich lays out in excruciating detail the disasters orchestrated over decades by the architects of the American empire in the Middle East. Blunder after blunder, fed by hubris along with cultural, historical, linguistic, and religious illiteracy, has shattered cohesion within the Middle East. The wars we have waged have given birth to a frightening nihilistic violence embodied in radical jihadism. They have engendered an inchoate rage among the dispossessed and left in their wake a series of failed and disintegrating states. These wars have, as Bacevich writes, laid bare the folly of attempting to use military force as a form of political, economic, and social control. Bacevich is one of our finest chroniclers of the decline of empire, and America’s War for the Greater Middle East is an essential addition to his remarkable body of work.”—Chris Hedges, former Middle East bureau chief for The New York Times and author of Wages of Rebellion: The Moral Imperative of Revolt

“Andrew Bacevich’s thoughtful, persuasive critique of America’s crusade for the Greater Middle East should be compulsory reading for anyone charged with making policy for the region. We cannot afford to repeat the past misjudgments on the area. As Bacevich wisely argues, the stakes are nothing less than the future well-being of the United States.”—Robert Dallek, author of Camelot’s Court: Inside the Kennedy White House