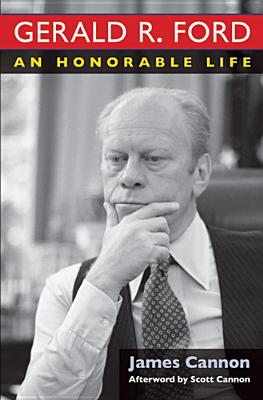 “Not since Harry Truman succeeded Franklin D. Roosevelt twenty-nine years earlier had the American people known so little about a man who had stepped forward from obscurity to take the oath of office as President of the United States.”
—from Chapter 4

This is a comprehensive narrative account of the life of Gerald Ford written by one of his closest advisers, James Cannon. Written with unique insight and benefiting from personal interviews with President Ford in his last years, Gerald R. Ford: An Honorable Lifeis James Cannon’s final look at the simple and honest man from the Midwest.

James Cannon was a journalist, serving notably as a war correspondent in Korea and vice president of Newsweek, as well as Domestic Policy Adviser to President Ford and Chief of Staff to Senate Majority Leader Howard Baker. He published several books, including an authorized biography of Ford, Time and Chance: Gerald Ford’s Appointment with History (University of Michigan Press, 1998).

"This is a first-rate political history and a compassionate biography."
—Publishers Weekly

"[T]his insider account persuasively demonstrates that [Ford] was a far better president than campaigner and that, at a particularly low moment in our history, we were perhaps luckier than we knew to have him."
—Kirkus

"Cannon portrays a man who, despite the shadow of the Nixon pardon clouding his presidency, maintained an honorable reputation in the often unsavory business of politics."
—Booklist