Ghost on the Case (A Bailey Ruth Ghost Novel #8) (Hardcover) 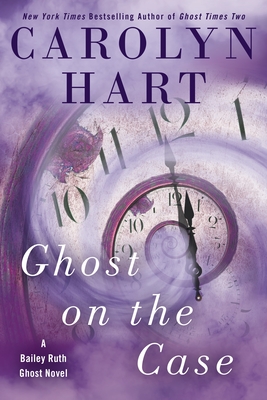 Ghost on the Case (A Bailey Ruth Ghost Novel #8) (Hardcover)

This is book number 8 in the A Bailey Ruth Ghost Novel series.

Bailey Ruth Raeburn is back, racing against the Heavenly clock in an all-new mystery from the New York Times bestselling author of Ghost Times Two.

Bailey Ruth finds herself comforting a distraught sister when she’s sent to Adelaide, Oklahoma, on her latest mission. Susan Gilbert receives a $100,000 ransom demand for her younger sibling. When the caller wants Susan to pay a visit to her wealthy boss and take the cash from his safe, Bailey Ruth follows Susan to the home. But she finds herself in a quandary, knowing that robbery is hardly a Heavenly pursuit.

While Susan waits to hear back from the kidnappers, Bailey Ruth attempts to piece together how the criminals targeted Susan and how they know about her boss’s money. At a luncheon the previous week, Susan’s boss asked her to open the safe so all the attendees knew it was filled with cash. Could one of the rich man’s closest confidants be behind the abduction?

Bailey Ruth is positive she can use her detective skills to figure out which luncheon guest arranged the kidnapping. But an unexpected twist in the case soon has Bailey Ruth seeking a murderer who has plans to send more victims to the great beyond...
An accomplished master of mystery, Carolyn Hart is the New York Times bestselling author of sixty novels of mystery and suspense including the Bailey Ruth Ghost Novels and the Death on Demand Mysteries. Her books have won multiple Agatha, Anthony, and Macavity awards. She has also been honored with the Amelia Award for significant contributions to the traditional mystery from Malice Domestic and was named a Grand Master by the Mystery Writers of America. One of the founders of Sisters in Crime, Hart enjoys mysteries, walking in the park, and cats.
Praise for Carolyn Hart, Winner of Multiple Agatha, Anthony, and Macavity Awards, and Author of the Bailey Ruth Ghost Novels

“Bailey Ruth and Wiggins will delight readers who prefer their mysteries light and seasoned with wit and the supernatural…Hart’s vision of Heaven is a hoot.”—The Boston Globe