Reading Up a Storm (A Lighthouse Library Mystery #3) (Mass Market) 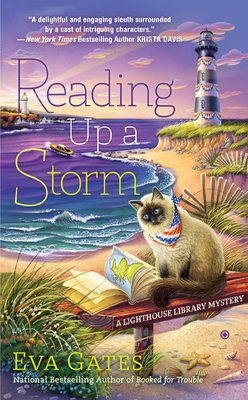 Reading Up a Storm (A Lighthouse Library Mystery #3) (Mass Market)

This is book number 3 in the A Lighthouse Library Mystery series.

The national bestselling author of The Spook in the Stacks returns with another charming mystery set in the most literary lighthouse in North Carolina’s Outer Banks.

Misfortune blows into North Carolina’s Outer Banks when a dead body in a boat on the shore leaves local librarian Lucy Richardson racing to solve a strange new mystery....

After a successful party at Bodie Island’s Lighthouse Library, librarian Lucy Richardson is ready to curl up with her cat, Charles, and a good book. But her R and R is cut short when she notices some mysterious lights leading a small boat to crash into the coast.

The two shipwrecked seafarers survive the ordeal—but one of them shows up dead ashore a few days later. Lucy finds herself again roped into a murder investigation and navigating a sea of suspects, all of whom had motives to deep-six the deceased. And this time, she has a sinking feeling that finding the real killer won’t be so easy...
Eva Gates is the author of the national bestselling Lighthouse Library mysteries. She began her writing career as a Sunday writer: a single mother of three high-spirited daughters, with a full-time job as a computer programmer. Now she has more than twenty novels under her belt in the mystery genre, published under the name Vicki Delany. She lives in Ontario.

Praise for the Lighthouse Library Mysteries

“Charming...A delightful and engaging sleuth surrounded by a cast of intriguing characters in an original and unique setting.”—Krista Davis, New York Times bestselling author of the Domestic Diva Mysteries

“Gates writes with the clarity and dazzle of a lighthouse beacon.”—Laura DiSilverio, author of the Book Club Mysteries

“A library in a lighthouse? And a cat? Sign me up! A fun read for all cozy fans.”—Laurie Cass, national bestselling author of the Bookmobile Cat Mysteries

“[A] charming, entertaining, and smart series...[featuring] an unusual (and real) setting and colorful cast of characters that set it apart from other bookish cozies.”—Library Journal (starred review)