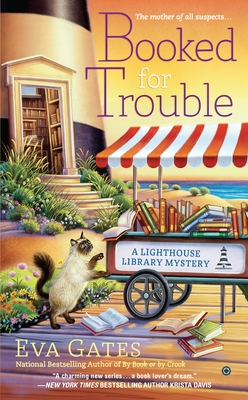 This is book number 2 in the A Lighthouse Library Mystery series.

The author of By Book or By Crook returns to the Outer Banks and the Lighthouse Library, where Lucy Richardson must shed light on a shocking murder…

Lucy has finally found her bliss as a librarian and resident of the Bodie Island Lighthouse. She loves walking on the beach, passing her evenings with the local book club, bonding with the library cat, Charles, and enjoying the attention of not one, but TWO eligible men. But then her socialite mother, Suzanne, unexpectedly drops in, determined to move Lucy back to Boston—and reunite her with her ex-fiancé.

To make matters worse, Suzanne picks a very public fight at the local hotel with her former classmate Karen Kivas. So, when Karen turns up dead outside the library the next morning, Suzanne is immediately at the top of the suspect list. Now Lucy must hunt down a dangerous killer—before the authorities throw the book at her poor mother…
Eva Gates is also the author By Book or by Crook, the first book in the Lighthouse Library Mystery series. She began her writing career as a Sunday writer: a single mother of three high-spirited daughters, with a full-time job as a computer programmer. Now she has more than ten novels under her belt in the mystery genre, published under the name Vicki Delany. She lives in Ontario.

Praise for By Book or By Crook

“A library in a lighthouse? And a cat? Sign me up!”—National bestselling author Laurie Cass