Death of a Maid (A Hamish Macbeth Mystery #22) (Mass Market) 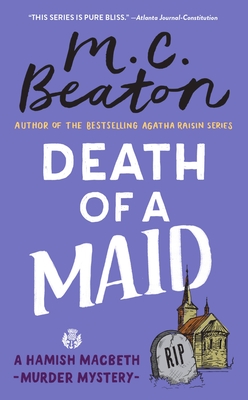 Death of a Maid (A Hamish Macbeth Mystery #22) (Mass Market)

This is book number 22 in the A Hamish Macbeth Mystery series.

Death of a Maid: A Hamish Macbeth Mystery

Mrs. Gillespie is famous around the northwest of Sutherland for being the best charwoman ever. Of course, if anyone has any social pretensions one does not say charwoman, one talks about "my maid". Hamish Macbeth wins Mrs. Gillespie's services in a church raffle but spends most of the day trying to avoid her. She is a malicious gossip and she bangs around the furniture and clanks pots--he wonders how on earth she managed to get such a good reputation.

Then she is found dead in a large house belonging to a retired professor who was out the day she was killed. She has been struck down by a metal bucket of water. Remembering Mrs. Gillespie's malicious gossip, Hamish is sure she delighted in finding out secrets and probably searched through the drawers of the houses she cleaned, which means everyone whose home she cleaned could be a suspect.
M. C. Beaton has won international acclaim for her New York Times bestselling Hamish Macbeth mysteries. The BBC has aired 24 episodes based on the series. Beaton is also the author of the bestselling Agatha Raisin series, which will air as an eight-episode dramatic series on Sky1, starring Ashley Jensen. She lives in the Cotswolds with her husband. For more information, you can visit MCBeaton.com.