Death of a Celebrity (A Hamish Macbeth Mystery #18) (Mass Market) 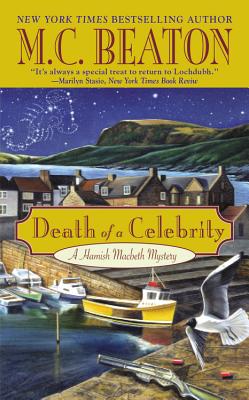 Death of a Celebrity (A Hamish Macbeth Mystery #18) (Mass Market)

This is book number 18 in the A Hamish Macbeth Mystery series.

Death of a Celebrity: A Hamish Macbeth Mystery

Murder on the Telly Lochdubh, a remote village reached only by a one-track lane, nestles serenely amid Scotland's hills...until well-known TV reporter Crystal French races into town in her bright BMW. And Constable Hamish Macbeth, dourly wed to duty instead of the fiancee who dumped him, promptly gives her a summons for reckless driving.

Outraged, Crystal makes Macbeth's life a misery with a TV report on policing in the Highlands. When she also rakes up old local scandals for her new hit show, Macbeth notes that someone besides himself might be dead keen to stop her. Then someone does-with stealth and violence. Now, finding out who did it will lead the laconic Macbeth down roads he never envisioned, into a dark story of passion and vengeance...and perhaps a crisis of the heart all his own.
M. C. Beaton has won international acclaim for her New York Times bestselling Hamish Macbeth mysteries. The BBC has aired 24 episodes based on the series. Beaton is also the author of the bestselling Agatha Raisin series, which will air as an eight-episode dramatic series on Sky1, starring Ashley Jensen. She lives in the Cotswolds with her husband. For more information, you can visit MCBeaton.com.