Death of a Hussy (A Hamish Macbeth Mystery #5) (Mass Market) 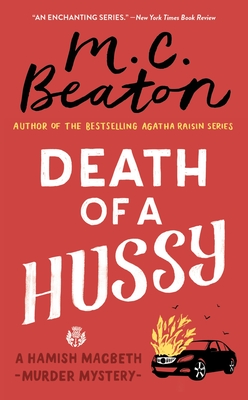 Death of a Hussy (A Hamish Macbeth Mystery #5) (Mass Market)

This is book number 5 in the A Hamish Macbeth Mystery series.

Death of a Hussy: A Hamish Macbeth Mystery

About the best that can be said of wealthy Maggie Baird is that inside her middle-aged body, there still beats the heart of a beautiful tart. So when her car catches fire with Maggie in it, there are five likely suspects right on the premises of her luxurious Highlands cottage. Lochdubh police constable Hamish Macbeth has to question Maggie's timid niece and four former lovers, one of whom Maggie had intended to pick for her husband.

All five are equally poor-with ample motive and opportunity to monkey with Maggie's car. Now to find the killer, the astute lawman must apply his extraordinary insight into human nature. But when the evidence appears to point to the wrong person entirely, Hamish must dig down deep to stop the real murderer's escape.
M. C. Beaton has won international acclaim for her New York Times bestselling Hamish Macbeth mysteries. The BBC has aired 24 episodes based on the series. Beaton is also the author of the bestselling Agatha Raisin series, which will air as an eight-episode dramatic series on Sky1, starring Ashley Jensen. She lives in the Cotswolds with her husband. For more information, you can visit MCBeaton.com.