Death of a Snob (A Hamish Macbeth Mystery #6) (Mass Market) 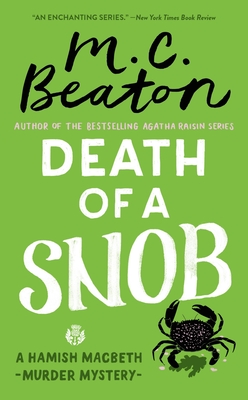 Death of a Snob (A Hamish Macbeth Mystery #6) (Mass Market)

This is book number 6 in the A Hamish Macbeth Mystery series.

Believing that someone is trying to murder her, gorgeous Jane Wetherby asks Hamish Macbeth to spend Christmas with her and an exclusive group of friends at her Scottish island health farm. With a cold in his head and no place to go for the holidays, Hamish accepts her invitation. He thinks the lady is a bit daft, but, arriving on the lonely isle of Eileencraig, he feels a prickle of foreboding. The locals are openly threatening; the other guests, especially a terrible snob named Heather Todd, are barely civil. So when Heather meets an untimely end, Hamish knows he doesn't have far to look for the culprit. The only snag in his investigation is that all the guests were in the house when Heather vanished. Now, as mysterious events abound on Eileencraig, Hamish must work through the holiday sniffles to find the killer-or else it will be a very miserable Christmas indeed . . .
M. C. Beaton has won international acclaim for her New York Times bestselling Hamish Macbeth mysteries. The BBC has aired 24 episodes based on the series. Beaton is also the author of the bestselling Agatha Raisin series, which will air as an eight-episode dramatic series on Sky1, starring Ashley Jensen. She lives in the Cotswolds with her husband. For more information, you can visit MCBeaton.com.