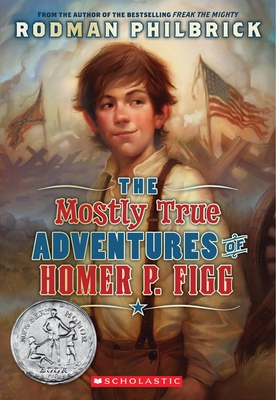 In this emotive Newbery Honor-winning page-turner, twelve-year-old orphan Homer runs away from Pine Swamp, Maine, to find his older brother, Harold, who has been sold into the Union Army. With laugh-aloud humor, Homer outwits and outruns a colorful assortment of civil War-era thieves, scallywags, and spies as he makes his way south, following clues that finally lead him to the Battle of Gettysburg and the dramatic story of the 20th Maine at Little Round Top. Even through a hail of gunfire, Homer never loses heart--but will he find his brother? Or will it be too late?

With engaging wit and comical repartee reminiscent of Mark Twain, master storyteller Rodman Philbrick introduces us to the unforgettable character of Homer in this groundbreaking historical novel.

Rodman Philbrick's The Mostly True Adventures of Homer P. Figg was chosen as a Newbery Honor Book, and his novel Zane and the Hurricane has received numerous starred reviews and was honored on the 2015-2016 Texas Bluebonnet Award Master List. His first book for young readers, Freak the Mighty, was an immediate bestseller and continues to be a classic, with more than four million copies in print. Philbrick divides his time between Maine/NH and Florida. Visit him at rodmanphilbrick.com.

* "The book wouldn't be nearly as much fun without Homer's tall tales, but there are serious moments, too, and the horror of war and injustice of slavery ring clearly above the din of playful exaggerations." -- Publishers Weekly, starred review