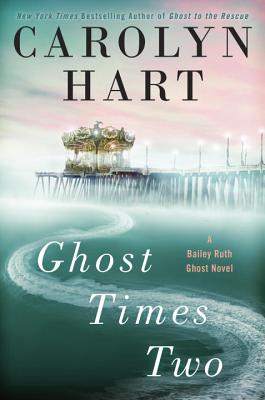 This is book number 7 in the A Bailey Ruth Ghost Novel series.

Carolyn Hart—New York Times bestselling author of Ghost to the Rescue—returns with a new Bailey Ruth Ghost Novel in which one woman shatters the glass ceiling...with a little help from beyond.

Bailey Ruth Raeburn’s latest mission is to guide the happy-go-lucky spirit of a deceased young man named Jimmy to the next life. But Jimmy is determined to watch over his still-living girlfriend, Megan, whom he wants to be happy even without him—which is easier said than done.

As if being haunted by her late boyfriend wasn’t enough, Megan is dealing with an arrogant, manipulative senior partner who threatens to fire Megan’s vulnerable secretary if Megan accepts a partnership at another law firm. She’s in an impossible bind.

Since Jimmy refuses to move on while Megan is being blackmailed, Bailey Ruth agrees to help him. But after the partner turns up dead and Megan is found at the crime scene, Bailey Ruth and Jimmy have to find a way to uncover a killer before the love of Jimmy’s life is ordered to spend a lifetime behind bars...
An accomplished master of mystery, Carolyn Hart is the New York Times bestselling author of more than fifty-five novels of mystery and suspense including the Bailey Ruth Ghost novels and the Death on Demand Mysteries. Her books have won multiple Agatha, Anthony, and Macavity awards. She has also been honored with the Amelia Award for significant contributions to the traditional mystery from Malice Domestic and was named a Grand Master by the Mystery Writers of America. One of the founders of Sisters in Crime, Hart lives in Oklahoma City, where she enjoys mysteries, walking in the park, and cats. She and her husband, Phil, serve as staff—cat owners will understand—to brother and sister brown tabbies.
“Bailey Ruth is someone you’d like to have known in life and would love to have watching your back from Heaven...The mystery is light hearted, fun, and as always, a good read.”—Kings River Life Magazine

“Bailey Ruth and Wiggins will delight readers who prefer their mysteries light and seasoned with wit and the supernatural...Hart’s vision of Heaven is a hoot.”—Boston Globe