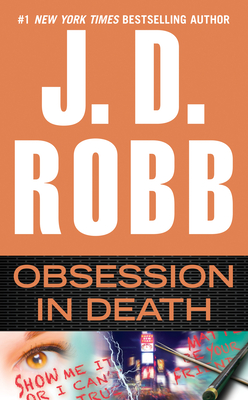 This is book number 40 in the In Death series.

Eve Dallas has solved a lot of high-profile murders for the NYPSD and gotten a lot of media. She—and her husband Roarke—are getting accustomed to being objects of attention, of gossip, of speculation.

But now Eve has become the object of one person’s obsession. Someone who finds her extraordinary, and thinks about her every hour of every day. Who believes the two of them have a special relationship. Who would kill for her—again and again…

With a murderer reading meanings into her every move, handling this case will be a delicate—and dangerous—psychological dance. And Eve knows that underneath the worship and admiration, a terrible threat lies in wait. Because the beautiful lieutenant is not at all grateful for these bloody offerings from her “true and loyal friend.” And in time, idols always fall…

J. D. Robb is the pseudonym for a #1 New York Times bestselling author of more than 200 novels, including the bestselling In Death series. There are more than 500 million copies of her books in print.


“It takes an astonishingly talented author to keep a series exciting and compelling for 40 books, but that is what superstar Robb has done with flair!...Longtime readers will be intrigued as this terrific thriller gathers numerous faces from past cases, placing some in mortal jeopardy. For this milestone book, Robb brings her 'A' game! Outstanding!”—RT Book Reviews

Praise for the In Death series