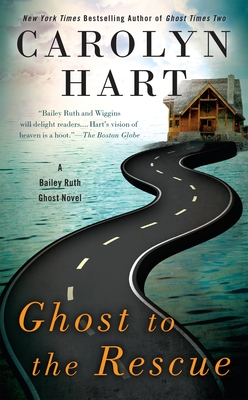 This is book number 6 in the A Bailey Ruth Ghost Novel series.

Supervisor Wiggins at Heaven’s Department of Good Intentions dispatches Bailey Ruth to her old hometown of Adelaide, Oklahoma, to help a single mother and struggling writer. Deidre Davenport is almost broke, supporting two children, and hoping to get a faculty job with the Goddard College English Department. Professor Jay Knox is the one who decides who gets the job, but he’s more interested in Deidre’s body than her body of work.

Shortly after his advances are rejected, Knox turns up dead—with Deidre’s fingerprints found on the murder weapon. Bailey Ruth knows her charge is innocent. Now, she must find out who really knocked off Knox if Deidre and her family are ever going to have a happy ending...
An accomplished master of mystery, Carolyn Hart is the New York Times bestselling author of more than fifty-five novels of mystery and suspense, including the Death on Demand Mysteries (Don’t Go Home, Death at the Door) and the Bailey Ruth Ghost Novels (Ghost Wanted, Ghost Gone Wild). Her books have won multiple Agatha, Anthony, and Macavity awards. She’s also been honored with the Amelia Award for significant contributions to the traditional mystery from Malice Domestic and was named a Grand Master by the Mystery Writers of America. One of the founders of Sisters in Crime, Hart lives in Oklahoma City, where she enjoys mysteries, walking in the park, and cats. She and her husband, Phil, serve as staff—cat owners will understand—to brother and sister brown tabbies.

“A writers’ conference makes an entertaining crime setting that shows the darker side of the literary profession. This solid mystery with a paranormal twist keeps readers intrigued until the very end, when an ingenious setup corners a killer.”—RT Book Reviews

“Bailey Ruth and Wiggins will delight readers who prefer their mysteries light and seasoned with wit and the supernatural…Hart’s vision of Heaven is a hoot.”—Boston Globe