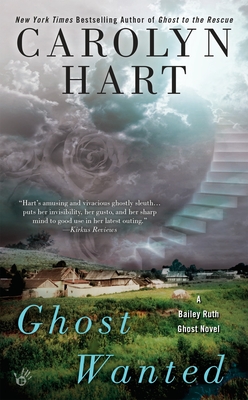 This is book number 5 in the A Bailey Ruth Ghost Novel series.

New York Times bestselling author Carolyn Hart treats readers to another visitation by ghostly gumshoe Bailey Ruth Raeburn as she lends a hand to an ethereal matchmaker who haunts a library...

Bailey Ruth’s supervisor, Wiggins, is worried about a dear old friend—the ghost of elegant Lorraine Marlow, who haunts Adelaide, Oklahoma’s college library. Known as the Lady of the Roses, she plays matchmaker, using the fragrant flowers to pair up students. But someone’s making mischief after hours, leaving roses strewn about the library and stealing a valuable book. Concerned with Lorraine’s reputation among the living, Wiggins dispatches Bailey Ruth to investigate.

Soon trouble begins to stack up. A campus security guard is shot by an intruder, and Bailey Ruth uncovers a catalog of evidence blaming a student for the crimes. But something isn’t adding up, so with police preparing to make an arrest, the spirited detective must find the real culprit. Because when justice is overdue, it takes more than death to stop Bailey Ruth Raeburn...
An accomplished master of mystery, Carolyn Hart is the New York Times bestselling author of more than fifty-five novels of mystery and suspense including the Bailey Ruth Ghost Novels and the Death on Demand Mysteries. Her books have won multiple Agatha, Anthony, and Macavity awards. She has also been honored with the Amelia Award for significant contributions to the traditional mystery from Malice Domestic and was named a Grand Master by the Mystery Writers of America. One of the founders of Sisters in Crime, Hart lives in Oklahoma City, where she enjoys mysteries, walking in the park, and cats. She and her husband, Phil, serve as staff—cat owners will understand—to brother and sister brown tabbies.

“Hart is an accomplished writer who pieces together mysteries with perfect timing...Bailey is a charming and witty sleuth.”—RT Book Reviews

“Bailey Ruth and Wiggins will delight readers who prefer their mysteries light and seasoned with wit and the supernatural…Hart’s vision of Heaven is a hoot.”—Boston Globe