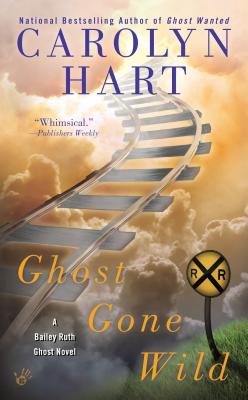 This is book number 4 in the A Bailey Ruth Ghost Novel series.

As far as emissaries from Heaven’s Department of Good Intentions go, Bailey Ruth is far from the top of the go-to list for assignments in the eyes of her boss, Wiggins. So she’s surprised when she’s dropped off on the outskirts of her old hometown, Adelaide, Oklahoma, at the home of young Nick Magruder. When a window cracks and a rifle barrel is thrust inside, only Bailey Ruth’s hasty intervention saves Nick from taking a bullet. But after she materializes to reassure him, she finds she can’t go back to vanishing. What gives?

It turns out Bailey’s been tricked by Nick’s late aunt to come to his rescue, which means Wiggins has no idea where she is—and now she may be trapped in Adelaide forever. Unless she can help snare the person who wants Nick dead...

An accomplished master of mystery, Carolyn Hart is the New York Times bestselling author of more than fifty-five novels of mystery and suspense including the Bailey Ruth Ghost Novels and the Death on Demand Mysteries. Her books have won multiple Agatha, Anthony, and Macavity awards. She has also been honored with the Amelia Award for significant contributions to the traditional mystery from Malice Domestic and was named a Grand Master by the Mystery Writers of America. One of the founders of Sisters in Crime, Hart lives in Oklahoma City, where she enjoys mysteries, walking in the park, and cats. She and her husband, Phil, serve as staff—cat owners will understand—to brother and sister brown tabbies.

“Bailey Ruth and Wiggins will delight readers who prefer their mysteries light and seasoned with wit and the supernatural...Hart’s vision of Heaven is a hoot.”—Boston Globe