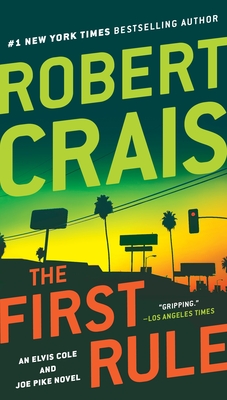 This is book number 13 in the An Elvis Cole and Joe Pike Novel series.

“Frank Meyer, a former mercenary now living a normal life, has been killed along with his family. Has his past come back to haunt him? Or has he been involved in 'something bad,' as the police believe? Frank was one of Joe Pike's men, and Pike is determined to discover the truth -- no matter how dangerous. If you are looking for strong characters and strong action The First Rule is for you.”
— Karen Briggs, Great Northern Books and Hobbies, Oscoda, MI

Joe Pike and his partner Elvis Cole must solve the murder of an old friend and his entire family in this gripping thriller from #1 New York Times bestselling author Robert Crais.

When Frank Meyer and his family are executed during a home invasion, the police begin investigating the secret life they're sure Meyer had. Joe Pike's on a hunt of his own: to clear his friend's name, and to punish the people who murdered him. What starts out as a simple trail gets twisted fast by old grudges, double crosses, blood vengeance, and a crime so terrible even Pike and his partner Elvis Cole have no way to measure it.
Robert Crais is the #1 New York Times bestselling author of more than twenty novels, many of them featuring private investigator Elvis Cole and his laconic ex-cop partner, Joe Pike. Before writing his first novel, Crais spent several years writing scripts for such major television series as Hill Street Blues, Cagney & Lacey, Miami Vice, Quincy, Baretta, and L.A. Law. He received an Emmy nomination for his work on Hill Street Blues, and one of his standalone novels, Hostage, was made into a movie starring Bruce Willis. His novels have been translated into forty-two languages and are bestsellers around the world. A native of Louisiana, he lives in Los Angeles.

“Is it possible for a crime novel to be both ultra-violent and elegant? If so, then The First Rule is a prime example. The mayhem is graphic and unflinching, but the prose and story line are as sleek and efficient as a beautifully crafted piece of machinery.”—The Seattle Times

“Crais follows a straightforward, no-nonsense tradition that marks him as a direct descendant of Raymond Chandler.”—Pittsburg Tribune-Review