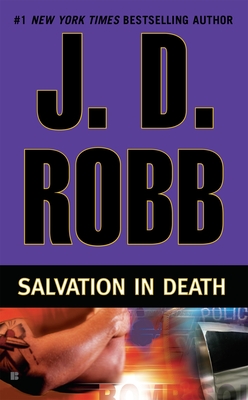 This is book number 27 in the In Death series.

Seconds after partaking of wine during a Catholic funeral mass, Father Miguel Flores is dead on the altar. Detective Lieutenant Eve Dallas confirms that the consecrated wine contained enough potassium cyanide to kill a rhino. And though the East Harlem neighborhood is a long way from the stone mansion she shares with her billionaire husband Roarke, it’s the holiness flying around St. Christobal’s that makes her uneasy.

The autopsy reveals faint scars of knife wounds, a removed tattoo—and evidence of plastic surgery suggesting “Father Flores” may not be the man his parishioners thought. Now, as Eve pieces together clues that suggest identity theft, gang connections, and a deeply personal act of revenge, she hopes to track down whoever committed this unholy act. Until a second murder—in front of an even larger crowd of worshippers—knocks the whole investigation sideways...
J. D. Robb is the pseudonym for a #1 New York Times bestselling author of more than 200 novels, including the bestselling In Death series. There are more than 500 million copies of her books in print.

Praise for the In Death series