E=mc2: A Biography of the World's Most Famous Equation (Paperback) 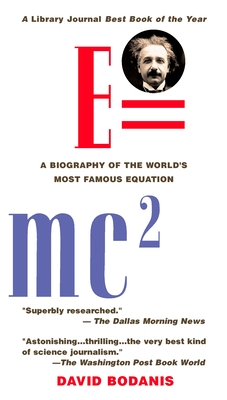 By David Bodanis
Email or call for price
Special Order

Bodanis begins by devoting chapters to each of the equation's letters and symbols, introducing the science and scientists forming the backdrop to Einstein's discovery—from Ole Roemer's revelation that the speed of light could be measured to Michael Faraday's pioneering work on energy fields. Having demystified the equation, Bodanis explains its science and brings it to life historically, making clear the astonishing array of discoveries and consequences it made possible. It would prove to be a beacon throughout the twentieth century, important to Ernest Rutherford, who discovered the structure of the atom, Enrico Fermi, who probed the nucleus, and Lise Meitner, who finally understood how atoms could be split wide open. And it has come to inform our daily lives, governing everything from the atomic bomb to a television's cathode-ray tube to the carbon dating of prehistoric paintings.

David Bodanis studied mathematics at the University of Chicago and in 1988 became a Senior Associate Member of St. Anthony's College in Oxford, England. From 1991-97, he lectured at the University of Oxford, designing the university's main survey of social science methods. Author of several books, he is an ideas consultant to corporations and organizations worldwide. A native of Chicago, he lives in London with his family.

"This is not a physics book. It is a history of where the equation [E=mc2] came from and how it has changed the world. After a short chapter on the equation's birth, Bodanis presents its five symbolic ancestors in sequence, each with its own chapter and each with rich human stories of achievement and failure, encouragement and duplicity, love and rivalry, politics and revenge. Readers meet not only famous scientists at their best and worst but also such famous and infamous characters as Voltaire and Marat...Bodanis includes detailed, lively and fascinating back matter...His acknowledgements end, 'I loved writing this book.' It shows." —The Cleveland Plain Dealer"E=mc2, focusing on the 1905 theory of special relativity, is just what its subtitle says it is: a biography of the world's most famous equation, and it succeeds beautifully. For the first time, I really feel that I understand the meaning and implications of that equation, as Bodanis takes us through each symbol separately, including the = sign...there is a great 'aha!' awaiting the lay reader." —St. Louis Post-Dispatch"'The equation that changed everything' is familiar to even the most physics-challenged, but it remains a fuzzy abstraction to most. Science writer Bodanis makes it a lot more clear." —Discover"Excellent...With wit and style, he explains every factor in the world's most famous and least understood equation....Every page is rich with surprising anecdotes about everything from Einstein's youth to the behind-the-scenes workings of the Roosevelt administration. Here's a prediction: E=mc2 is one of those odd, original, and handsomely written books that will prove more popular than even its publisher suspects." —Nashville Scene"You'll learn more in these 300 pages about folks like Faraday, Lavoisier, Davy and Rutherford than you will in many a science course...a clearly written, astonishingly understandable book that celebrates human achievement and provides some idea of the underlying scientific orderliness and logic that guides the stars and rules the universe." —Parade"Bodanis truly has a gift for bringing his subject matter to life." —Library Journal [starred review]"Entertaining...With anecdotes and illustrations, Bodanis effectively opens up E=mc2 to the widest audience." —Booklist"Accessible...he seeks, and deserves, many readers who know no physics. They'll learn a handful-more important, they'll enjoy it, and pick up a load of biographical and cultural curios along the way." —Publishers Weekly