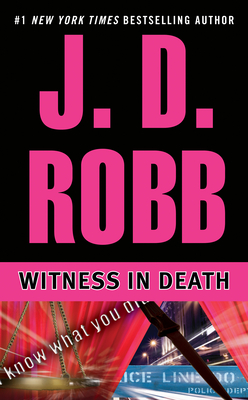 This is book number 10 in the In Death series.

When a famous thespian is killed right before her eyes, New York detective Eve Dallas takes a new place in crime as both officer and witness to murder in this novel in the #1 New York Times bestselling In Death series.

The opening night of the revival of Agatha Christie's "Witness for the Prosecution" at New York’s New Globe Theater turns from stage scene to crime scene when the leading man is stabbed to death right on center stage. Now Eve Dallas has a high-profile celebrity homicide on her hands. Not only is she lead detective, she’s also a witness—and when the press discovers that her husband owns the theater, there’s more media spotlight than either can handle. The only way out is to move fast. Question everyone and everything…and in the meantime, try to tell the difference between the truth—and really good acting…
J. D. Robb is the pseudonym for a #1 New York Times bestselling author of more than 200 novels, including the bestselling In Death series. There are more than 500 million copies of her books in print.

“A classic mystery developed with all the subtlety of Christie combined with the incomparable style and panache of todays most remarkable author, this mesmerizing play within a play is well nigh irresistible with its taut, crisp dialogue, intricate plot and memorable characters.”—RT Book Reviews