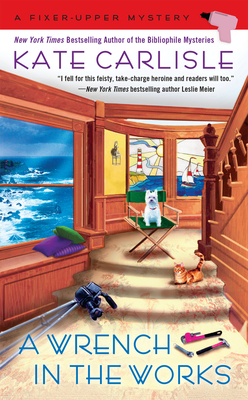 This is book number 6 in the A Fixer-Upper Mystery series.

Lights! Camera! Homicide! Contractor Shannon Hammer has to dig through murder suspects in the latest Fixer-Upper Mystery from the New York Times bestselling author of Eaves of Destruction and Once Upon a Spine.

Shannon Hammer’s younger sister, Chloe, left Lighthouse Cove after high school to make it big in Hollywood. And she did it! Chloe is the cohost of a popular home repair show on the Home Builders Network. Now, after ten years, she has returned to their quaint coastal hometown to film several shows featuring her sister, Shannon, along with some special mini-segments on Victorian style and design.

But Shannon quickly realizes that things are not exactly blissful in TV land. Bree, the executive producer of the show, has a knack for stirring up sticky situations, and when she’s found dead, Chloe and the entire crew are under suspicion. Shannon, her thriller writer boyfriend, Mac, and their crime-solving friends soon unearth the real reason Chloe left home. Is that ten-year-old secret connected to Bree’s death? And can Shannon track down the real killer before her beloved sister becomes the next victim?
A native Californian, New York Times bestselling author Kate Carlisle worked in television for many years before turning to writing. A lifelong fascination with the art and craft of bookbinding led her to write the Bibliophile Mysteries featuring Brooklyn Wainwright, whose bookbinding and restoration skills invariably uncover old secrets, treachery, and murder. She is also the author of the Fixer-Upper Mysteries featuring small-town girl Shannon Hammer, a building contractor specializing in home restoration.
Praise for Kate Carlisle's Fixer-Upper Mysteries

"I fell for this feisty, take-charge heroine and readers will, too."--Leslie Meier, New York Timesbestselling author

"Another winner from one of the leaders in the genre!"--RT Book Reviews

"Carlisle's second contractor cozy continues to please with its smart, humorous heroine and plot. Fans of Sarah Graves's Home Repair Is Homicide series will appreciate this title as a solid read-alike."--Library Journal

"Highly entertaining...Quick, clever, and somewhat edgy...Shannon's not a stereotype--she's a person, and an interesting, intelligent, likable one at that, which makes it easy to become invested in her tale."--Smitten by Books