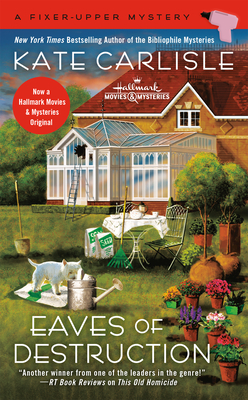 This is book number 5 in the A Fixer-Upper Mystery series.

Murder is on the to-do list when construction contractor Shannon Hammer looks for a killer in the fifth Fixer-Upper Mystery...

At the annual Victorian Home and Garden Tour, Lighthouse Cove, California’s premier contractor, Shannon Hammer, realizes that the competition is about to turn deadly....

Shannon is in high demand among rival homeowners, who will do anything to win Best in Show. One-upmanship and even espionage break out among neighbors, construction crews, decorators, and landscapers. Thanks to several new hires, Shannon is sure she can handle the extra load—until murder throws a wrench in the works.

The small town’s corrupt building inspector is found dead on one of Shannon’s jobsites, and soon plenty of suspects are coming out of the woodwork. When another body is discovered, Shannon calls on her team of close friends and devilishly astute thriller writer Mac to help her nail down the details and build a case against the killer before the door shuts on someone else—for good.
A native Californian, New York Times bestselling author Kate Carlisle worked in television for many years before turning to writing. Inspired by the northern seaside towns of her native California, where Victorian mansions grace the craggy cliffs and historic lighthouses warn fishermen and smugglers alike, Kate was drawn to create the Fixer-Upper Mysteries, featuring small-town girl Shannon Hammer, a building contractor specializing in home restoration. Kate also writes the New York Times bestselling Bibliophile Mysteries featuring Brooklyn Wainwright.