The Promise: An Elvis Cole and Joe Pike Novel (Paperback) 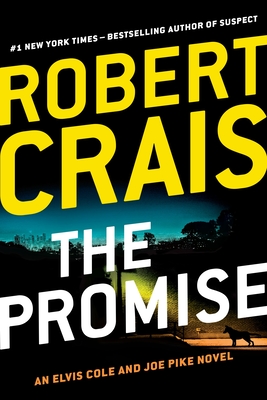 The Promise: An Elvis Cole and Joe Pike Novel (Paperback)

This is book number 16 in the An Elvis Cole and Joe Pike Novel series.

Elvis Cole and Joe Pike keep their promises. Even if it could get them killed...

Elvis Cole is hired to find a woman who’s disappeared, a seemingly ordinary case, until he learns the missing woman is an explosives expert and worked for a Defense Department contractor. Meanwhile, LAPD K-9 Officer Scott James and his patrol dog, Maggie, track a fugitive to a house filled with explosives—and a dead body. As the two cases intertwine, they all find themselves up against shadowy arms dealers and corrupt officials, and the very woman they promised to save may be the cause of their own deaths.
Robert Crais is the #1 New York Times bestselling author of more than twenty novels, many of them featuring private investigator Elvis Cole and his laconic ex-cop partner, Joe Pike. Before writing his first novel, Crais spent several years writing scripts for such major television series as Hill Street Blues, Cagney & Lacey, Miami Vice, Quincy, Baretta, and L.A. Law. He received an Emmy nomination for his work on Hill Street Blues, and one of his standalone novels, Hostage, was made into a movie starring Bruce Willis. His novels have been translated into forty-two languages and are bestsellers around the world. A native of Louisiana, he lives in Los Angeles.

“What a perfect book: It has layered, appealing characters, a riveting plot, a most satisfying ending—and a German shepherd! Investigator Elvis Cole thinks he’s finding a missing woman, but what unfolds is a case involving explosives, terrorists, betrayals, and broken hearts. Grade: A.”—Cleveland Plain Dealer

“Robert Crais takes the most popular characters from previous novels and shakes them up in an intense and thrilling mystery. Crais delivers a master class in writing with this latest novel.”—Associated Press

“After 20 novels, Crais remains one of crime fiction's smartest and most effortless plotters. The story unfolds with supreme ease.”—Kirkus Reviews

“Master crime fiction writer Crais delivers another winner....For readers who long for character crossovers and unambiguous resolutions, this excellent thriller should fit the bill. A skillfully convoluted plot evolves ever so slowly and culminates in a satisfying finish that also successfully ties up multiple story lines.”—Library Journal

“MWA Grandmaster Crais is at the top of his game.”—Publishers Weekly (starred review)