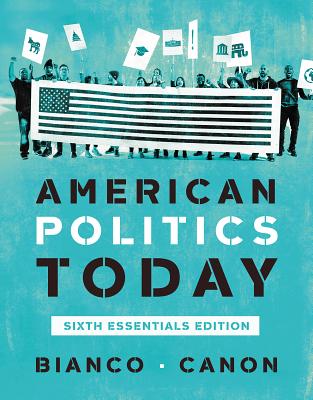 By William T. Bianco, David T. Canon
Email or call for price
Out of Print

Cut through the noise to understand how politics really works

Fake news. Twitter rants. Misinformation. Silos. Echo chambers. Spin. Alternative facts. Investigation, accusation, and obfuscation. Punditry, polls, and prognostication. This is today’s politics. To cut through the noise, students need a guide to how politics really works and why it matters. American Politics Today has been that trusted source. And the new sixth edition brings even greater focus to examining preconceived notions of how government operates and understanding what’s really going on.

William T. Bianco is professor of political science at Indiana University, Bloomington. His research focuses on congressional institutions, representation, and international cooperation in crewed spaceflight. He received his undergraduate degree from SUNY Stony Brook and his MA and Ph.D. from the University of Rochester. He is the author of Trust: Representatives and Constituents and numerous journal articles. His research and graduate students have received funding from the National Science Foundation and the National Council for Eurasian and Eastern European Research. He has served as a consultant to various candidates, political parties, and government agencies. He was also a Fulbright Senior Scholar in Moscow, Russia, during 2011–12.

David T. Canon is professor and department chair of political science at the University of Wisconsin, Madison. His teaching and research interests focus on American political institutions, especially Congress, and racial representation. He is the author of Actors, Athletes, and Astronauts: Political Amateurs in the United States Congress; Race, Redistricting, and Representation: The Unintended Consequences of Black Majority Districts (winner of the Richard F. Fenno Prize); The Dysfunctional Congress? (with Kenneth Mayer); and various articles and book chapters. He served a term as the Congress editor of Legislative Studies Quarterly. He is an AP consultant and has taught in the University of Wisconsin AP Summer Institute for U.S. Government and Politics since 1997. Professor Canon is the recipient of a University of Wisconsin Chancellor's Distinguished Teaching Award.