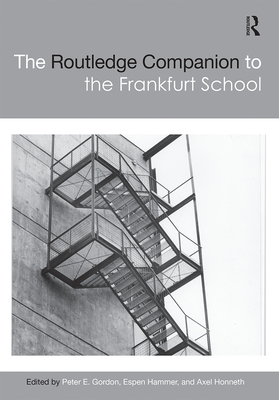 The portentous terms and phrases associated with the first decades of the Frankfurt School - exile, the dominance of capitalism, fascism - seem as salient today as they were in the early twentieth century. The Routledge Companion to the Frankfurt School addresses the many early concerns of critical theory and brings those concerns into direct engagement with our shared world today. In this volume, a distinguished group of international scholars from a variety of disciplines revisits the philosophical and political contributions of Theodor W. Adorno, Walter Benjamin, Max Horkheimer, Herbert Marcuse, J rgen Habermas, Axel Honneth, and others.

Throughout, the Companion's focus is on the major ideas that have made the Frankfurt School such a consequential and enduring movement. It offers a crucial resource for those who are trying to make sense of the global and cultural crisis that has now seized our contemporary world.