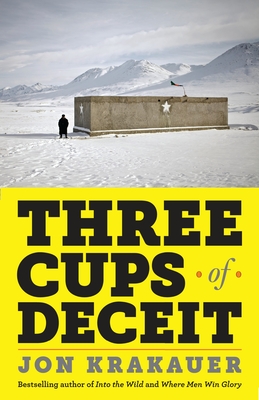 Greg Mortenson, the bestselling author of Three Cups of Tea, is a man who has built a global reputation as a selfless humanitarian and children’s crusader, and he’s been nominated for the Nobel Peace Prize. But, as bestselling author Jon Krakauer demonstrates in this extensively researched and penetrating book, he is not all that he appears to be.

Based on wide-ranging interviews with former employees, board members, and others who have intimate knowledge of Mortenson and his charity, the Central Asia Institute, Three Cups of Deceit uncovers multiple layers of deception behind Mortenson’s public image. Was his crusade really inspired by a desire to repay the kindness of villagers who nursed him back to health when he became lost on his descent down K2? Was he abducted and held for eight days by the Taliban? Has his charity built all of the schools that he has claimed? This book is a passionately argued plea for the truth, and a tragic tale of good intentions gone very wrong.

100% of Jon Krakauer’s proceeds from the sale of Three Cups of Deceit will be donated to the “Stop Girl Trafficking” project at the American Himalayan Foundation (www.himalayan-foundation.org/live/project/stopgirltrafficking).

Jon Krakauer is the author of eight books and has received an Academy Award in Literature from the American Academy of Arts and Letters. According to the award citation, "Krakauer combines the tenacity and courage of the finest tradition of investigative journalism with the stylish subtlety and profound insight of the born writer."

“Krakauer forcefully claims that Mortenson improperly used his charity’s funds and failed to build all the schools he says he did.” –Chicago Tribune