The Soul of the First Amendment (Hardcover) 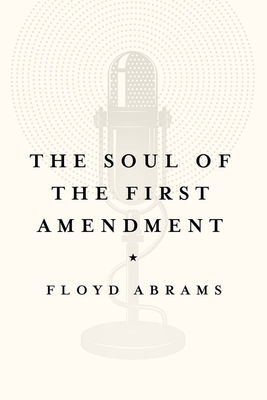 The Soul of the First Amendment (Hardcover)

The right of Americans to voice their beliefs without government approval or oversight is protected under what may well be the most honored and least understood addendum to the US Constitution—the First Amendment. Floyd Abrams, a noted lawyer and award-winning legal scholar specializing in First Amendment issues, examines the degree to which American law protects free speech more often, more intensely, and more controversially than is the case anywhere else in the world, including democratic nations such as Canada and England. In this lively, powerful, and provocative work, the author addresses legal issues from the adoption of the Bill of Rights through recent cases such as Citizens United. He also examines the repeated conflicts between claims of free speech and those of national security occasioned by the publication of classified material such as was contained in the Pentagon Papers and was made public by WikiLeaks and Edward Snowden.

Floyd Abrams has litigated First Amendment cases ranging from the Pentagon Papers case to Citizens United and has taught as a visiting lecturer at the Yale and Columbia Law Schools.
“Claims of American exceptionalism can be exaggerated. But the First Amendment really does make America unique, even within the industrialized democracies. . . . [Abrams] celebrates that fact in The Soul of the First Amendment.”—Daniel W. Drezner, New York Times Book Review

"[Floyd Abrams], the titan of free speech jurisprudence, [calls his] new book, The Soul of the First Amendment, 'really a story of American exceptionalism.' It argues that the United States' protections for free speech are the best in the world, at least as of now."—Jim Rutenberg, New York Times

"Abrams’s engaging and plain-spoken reflections will be of interest to those already steeped in constitutional law as well as young readers curious about the nation’s founding ideals. . . . For Abrams, one inescapable truth applies across the history of First Amendment disputes. To allow the government to determine whose speech can be regulated . . . is, as [his] fascinating history shows, literally to play with fire."—Daniel Shuchman, Wall Street Journal

"Readable and comprehensible to both a specialized audience of lawyers and laypeople just looking to understand a little more about these rights. The book’s brevity does not detract from its substance or clarity as Abrams explains the origins and tensions of the First Amendment. He dives into historic and contemporary controversies that test our adherence to these principles, noting, 'Speech is sometimes ugly, outrageous, even dangerous.'"—Roy S. Gutterman, Washington Post

"Thoughtful and concise. . . . Abrams assumes little prior knowledge from the reader. . . . Many readers will find the most value in Abrams’s discussion of Citizens United. . . . Even those troubled by the Citizens United decision, which allowed more corporate money into U.S. elections, are likely to emerge with a greater understanding of the Supreme Court majority’s logic in that controversial case."—Publishers Weekly

“The Soul of the First Amendment is a significant book about one of our most important rights, one that we should never take for granted.”—Joel Cohen, New York Law Journal

"One sign of a good book is its ability to engage readers, to pique curiosity, and to urge one to return anew to something largely known but mostly forgotten. By that measure, Floyd Abrams’ latest book, The Soul of the First Amendment, is a valuable book."—Ronald K. L. Collins, Concurring Opinions

“In contrast to many First Amendment tomes that concentrate on case law, The Soul of the First Amendment is eminently readable. That Abrams reveals so much in so few pages is no small accomplishment.”—William Lippincott, Claremont Review of Books

"[Abrams'] latest book combines a concise refresher on the history of the speech and press clauses, both their somewhat painful birth and their judicial interpretation since then; the uniqueness of that interpretation within a global context; and Abrams’s own perspectives on issues such as campaign spending."—Clay Calvert, Journalism and Mass Communication Quarterly

"A great book about the soul of the first amendment by its most distinguished and enduring defender. Floyd Abrams didn’t write the first amendment but he has done so much to protect it—and us all—from those who would curtail it in the false names of security, sensitivity and political correctness."—Alan Dershowitz, author of Taking the Stand: My Life in the Law

"Floyd Abrams is the greatest free speech advocate of modern times—he is to the First Amendment what Muhammad Ali was to boxing—and his book explaining and defending the First Amendment’s soul, like his advocacy, is elegant, concise, and profoundly persuasive."—Rodney A. Smolla, Dean, Delaware Law School

"Floyd Abrams is one of America’s greatest constitutional lawyers and defenders of the First Amendment. In this inspiring book, he reminds us why it’s important to protect the speech we hate even on platforms where the First Amendment doesn’t formally apply—from tech platforms to college campuses—and why the future of democracy depends on our willingness to resist growing calls from all sides to suppress unpopular speech."—Jeffrey Rosen, author of Louis D. Brandeis: American Prophet

"This book provides a powerful, much needed response to mounting criticism of the robust freedom of speech enshrined in US culture and law. Individuals from many sectors of our society that have traditionally championed free speech—including academics, students, writers, and liberals/progressives—have increasingly advocated curbs on speech by certain disfavored speakers or that conveys certain disfavored messages. Abrams convincingly shows the adverse consequences of such an approach, with examples from other countries as well as US history. While fairly recognizing that speech can and does cause harm to individuals and society, he demonstrates that government censorship causes immeasurably greater harm."—Nadine Strossen, Former President, American Civil Liberties Union