Defending the Filibuster, Revised and Updated Edition: The Soul of the Senate (Paperback) 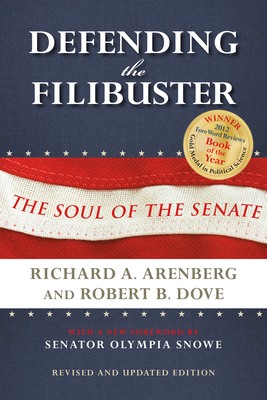 Many argue that the Senate filibuster is undemocratic or even unconstitutional. Recent legislative disputes have brought criticism of Senate rules into sharp relief, and demands for abolition or reform of the filibuster have increased. In Defending the Filibuster, a veteran Senate aide and a former Senate Parliamentarian maintain that the filibuster is fundamental to the character of the Senate, protecting the rights of the minority in American politics, assuring stability and deliberation in government, and helping to preserve constitutional principles of checks and balances and separation of powers. Richard A. Arenberg and Robert B. Dove provide an instructive historical overview of the development of Senate rules, describe related procedures and tactics, and argue passionately for measured reforms.

Thoroughly updated to reflect recent events, this edition includes a new chapter recounting the events of 2012-13 that led to the first use of the nuclear option to restrict the use of the filibuster for presidential nominations, as well as a new foreword by former US Senator Olympia Snowe. The authors offer a stimulating assessment of the likelihood of further changes in Senate procedure and make their own proposals for reform.