NGOs in Contemporary Britain: Non-State Actors in Society and Politics Since 1945 (Hardcover) 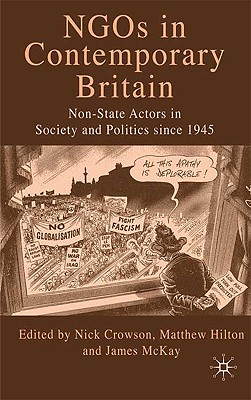 NGOs in Contemporary Britain: Non-State Actors in Society and Politics Since 1945 (Hardcover)

“The volume brings together fourteen excellent chapters by younger and more senior scholars, and this short review cannot do justice to the conceptual sophistication and empirical diversity of all its individual contributions. . . . This book is one of the very few edited collections in which the whole is more than its constituent parts. And it is an indication of the high quality and coherence of the volume's contributions that it provokes a series of questions that might lead to a more general debate about the key themes of contemporary British history.. In short, this book offers an extremely valuable compendium to a much neglected, yet extremely important part of contemporary British history and deserves a large readership.” —Holger Nehring, Twentieth-Century British History

“This book seeks to rectify a relative neglect of socio-political action by historians.   It does so through a series of appropriately selected and well executed case studies of particular organisations or movements. . . . This book raises as many questions as it answers, but that is a sign of strength rather than weakness and hopefully it will encourage further research in this area.” —Wyn Grant, Contemporary British History

“This is the first book-length analysis of one of the key features of post-1945 Britain: the proliferation of NGOs. . . . As the cover illustration suggests, the idea that the British are apathetic about how the world is run is difficult to reconcile with the scale and diversity of this activity. Neither the current political claims about 'broken Britian', nor historical narratives about the welfare state largely ending the role of the voluntary sector should survive a reading of this book. . . . Overall, this is an innovative and informative collection, which lays the basis for much more work on the significance of these bodies for our understanding of democracy and its workings in modern Britain.” —Jim Tomlinson, British Scholar

“NGOs in Contemporary Britain brings together a fascinating collection of case studies through which to contextualize changing understanding of what constitutes political activism. . . . As a collection [it] contains contributions that encompass the formal and informal, local and global, structured and voluntary, secular and religious, the everyday and the spectacular, reformist and more radicalized that together encompass the diversity of the term NGO, while managing not to lose all sense of the meaning of the term. It is a weight that the term appears largely able to bear.” —Lucy Robinson, Economic History Review