Presidents, Populism, and the Crisis of Democracy (Paperback) 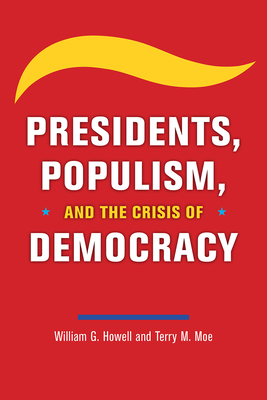 Has American democracy’s long, ambitious run come to an end? Possibly yes. As William G. Howell and Terry M. Moe argue in this trenchant new analysis of modern politics, the United States faces a historic crisis that threatens our system of self-government—and if democracy is to be saved, the causes of the crisis must be understood and defused.

The most visible cause is Donald Trump, who has used his presidency to attack the nation’s institutions and violate its democratic norms. Yet Trump is but a symptom of causes that run much deeper: social forces like globalization, automation, and immigration that for decades have generated economic harms and cultural anxieties that our government has been wholly ineffective at addressing. Millions of Americans have grown angry and disaffected, and populist appeals have found a receptive audience. These are the drivers of Trump’s dangerous presidency. And after he leaves office, they will still be there for other populists to weaponize.

What can be done to safeguard American democracy? The disruptive forces of modernity cannot be stopped. The solution lies, instead, in having a government that can deal with them—which calls for aggressive new policies, but also for institutional reforms that enhance its capacity for effective action.

The path to progress is filled with political obstacles, including an increasingly populist, anti-government Republican Party. It is hard to be optimistic. But if the challenge is to be met, we need reforms of the presidency itself—reforms that harness the promise of presidential power for effective government, but firmly protect against the fear that it may be put to anti-democratic ends.

William G. Howell is the Sydney Stein Professor in American Politics at the Harris School of Public Policy Studies and professor of political science in the College at the University of Chicago. He is the author or coauthor of several books, including, most recently, Thinking about the Presidency: The Primacy of Power and While Dangers Gather: Congressional Checks on Presidential War Powers.


Terry M. Moe is the William Bennett Munro Professor of Political Science at Stanford University and a senior fellow at the Hoover Institution.

"Howell and Moe write with clarity and verve. . . . And it is hard to object to their overarching goals of institutionally reforming our dysfunctional politics and improving the quality of our governance."
— Wall Street Journal

“This book highlights an important (and underappreciated) cause of the populism that threatens American democracy: ineffective government, or a political system that consistently fails to respond to our most important problems. Hard as it may be for Americans to accept, our constitutional system has grown dysfunctional. Howell and Moe propose clear constitutional solutions that break sharply with the conventional wisdom. We should take their ideas seriously. I recommend this book to anyone concerned about the fate of American democracy."
— Steven Levitsky, Harvard University, coauthor of How Democracies Die

"Howell and Moe show that Trump’s aggressive demagoguery is a perverse symptom of an American problem of administrative weakness and explain how the presidency can be made more effective, powerful, and accountable at the same time. An original, insightful, and provocative picture of American politics in a populist era."
— Jeffrey K. Tulis, author of Legacies of Losing in American Politics

"In this clarion call for institutional reform, Howell and Moe argue that populism is not the product of rampant polarization, political tribalism, or undemocratic features of our political system. Rather, the culprit is ineffective government. And the best antidote to populism, paradoxically, is the instrument that catapulted it to power: a reimagined presidency, one that is stronger in important respects, but weaker in others. The arguments are powerful, provocative, and sure to fuel debate over efforts to restore American democracy."
— Douglas L. Kriner, coauthor of The Myth of the Imperial Presidency

"Howell and Moe make a compelling case about the relationship between ineffective government and populism, namely, that a lack of capable government gives rise to populist leaders who promise to fix the system. The authors propose a bold solution to the problem and—whether or not one agrees with all specifics—force the weight of the argument onto the question of what should be done rather than whether anything should be attempted. A must read for students and scholars interested in contemporary American politics as well as the rise of populism worldwide."
— Brandice Canes-Wrone, Princeton University

"A timely, powerfully argued book about the dangers American democracy faces from populism—and how these dangers can be overcome by making government more potent and effective. The book is concise, accessible, and crisply written. It is sure to spark important debate."
— Eric M. Patashnik, author of Unhealthy Politics: The Battle over Evidence-Based Medicine