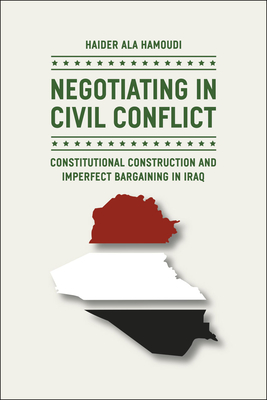 By Haider Ala Hamoudi
Email or call for price
Special Order

In 2005, Iraq drafted its first constitution and held the country’s first democratic election in more than fifty years. Even under ideal conditions, drafting a constitution can be a prolonged process marked by contentious debate, and conditions in Iraq are far from ideal: Iraq has long been racked by ethnic and sectarian conflict, which intensified following the American invasion and continues today. This severe division, which often erupted into violence, would not seem to bode well for the fate of democracy. So how is it that Iraq was able to surmount its sectarianism to draft a constitution that speaks to the conflicting and largely incompatible ideological view of the Sunnis, Shi’ah, and Kurds? Haider Ala Hamoudi served in 2009 as an adviser to Iraq’s Constitutional Review Committee, and he argues here that the terms of the Iraqi Constitution are sufficiently capacious to be interpreted in a variety of ways, allowing it to appeal to the country’s three main sects despite their deep disagreements. While some say that this ambiguity avoids the challenging compromises that ultimately must be made if the state is to survive, Hamoudi maintains that to force these compromises on issues of central importance to ethnic and sectarian identity would almost certainly result in the imposition of one group’s views on the others. Drawing on the original negotiating documents, he shows that this feature of the Constitution was not an act of evasion, as is sometimes thought, but a mark of its drafters’ awareness in recognizing the need to permit the groups the time necessary to develop their own methods of working with one another over time.

Haider Ala Hamoudi is associate professor of law at the University of Pittsburgh School of Law. He is the author of the memoir Howling in Mesopotamia.

“A rich account of constitutional politics in Iraq informed by the author’s firsthand knowledge of the major events. In contrast with the view that emphasizes the United States as the dominant actor in shaping and implementing the Iraqi Constitution, Haider Ala Hamoudi gives emphasis to local agency, arguing persuasively that the Constitution was adapted to meet local needs.”
— Tom Ginsburg, University of Chicago

“An essential guide for all those working to reconstruct a new constitutional order out of the turmoil of the Arab Spring. Haider Ala Hamoudi meticulously lays out the process by which Iraq’s own constitution-writing process evolved, bringing together fundamentally different understandings of the structure and functioning of the state into one generally agreed upon, though still imperfect, set of ground rules. Hamoudi makes the convincing case that developing constitutions for deeply divided societies emerging out of civil conflicts should be best approached cautiously and deliberately, with an emphasis on points of agreement rather than disagreement. This is an important work and a major contribution to Iraq and Arab studies, as well as to the broader field of constitutional theory and practice.”

— Ali Allawi, author of The Occupation of Iraq: Winning the War, Losing the Peace, former Iraqi Minister of Trade

“The question Hamoudi asks in Negotiating in Civil Conflict is why the Iraqi Constitution was so successful. Using unique primary resources, collected at the time of the negotiations, and Hamoudi’s personal experiences as an adviser to the Iraq Constitutional Review Committee in 2009, the book goes behind the scenes at the negotiations, investigates the aims and motives of the delegates, and starts to read between the lines of the Constitutional text."
— LSE Review of Books

“Well written and argued and full of new information. . . . Without denying the dysfunction of political and economic developments in Iraq, [Hamoudi] presents the constitution as the one dimension in Iraq’s post-occupation period that has succeeded to an extent. While he does regard the negotiations that have led to the constitutional outcome as “imperfect,” he sees a positive dimension here as well: namely the adoption of an incremental method of constitutional development, made possible by these very imperfections.”
— Global Law Books

“A richly detailed analysis. . . . Negotiating in Civil Conflict provides a valuable resource for understanding the motivations and bargains that produced Iraq’s constitution, and its controversial perspective on the constitution’s success will no doubt encourage further discussion and debate on the topic.”
— Perspectives on Politics