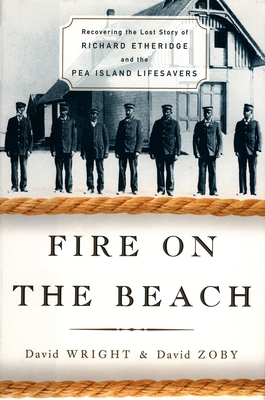 
Usually Ships in 3-7 Days
This book cannot be returned.
Fire on the Beach recovers the heroic, long-forgotten story of the only all-black crew in the history of the U.S. Coast Guard. In 1871 the Life-Saving Service, the precursor to the Coast Guard, was created by Congress to assure the safe passage of American and international shipping and to save lives and salvage cargo. Although it was decommissioned in 1915, a century ago the LSS boasted some two hundred stations, and the adventures of the now forgotten "surfmen" filled the pages of popular reading, from Harper's to the Baltimore Sun to the New York Herald. This book tells the story of Station 17 of Pea Island, North Carolina, and its courageous captain, Richard Etheridge. A former slave and Civil War veteran, Etheridge was appointed Keeper of the Pea Island station, but when the white crew already in place refused to serve under him, he recruited and trained an entirely black crew. Although they were among the most courageous in the service, leading many daring rescues and saving scores of men, women, and children along the treacherous stretch of coast known as "the Graveyard of the Atlantic," civilian attitudes toward the Pea Island surfmen ranged from curiosity to outrage. When a hurricane hit the Banks in the late 1890s, they managed to save everyone aboard the wrecked E.S. Newman. This incredible feat went unrecognized for a century until, in 1996, the Coast Guard posthumously awarded Etheridge and his men the Gold Life-Saving Medal. This courageous story of a group of men who battled prejudice as well as fierce storms to carry out heroic deeds illustrates yet another example of the contribution of one group of remarkable African Americans to this country's history.

David Wright is Assistant Professor of English and African American Studies at the University of Illinois. The recipient of the Zora Neale Hurston/Richard Wright Award, he has written for The Southern Review, The Kenyon Review, and the African American Review. David Zoby teaches at Casper College in Wyoming. His work has appeared in The Southern Poetry Review, the Georgia State Review, and elsewhere.