From Breakthrough to Blockbuster: The Business of Biotechnology (Hardcover) 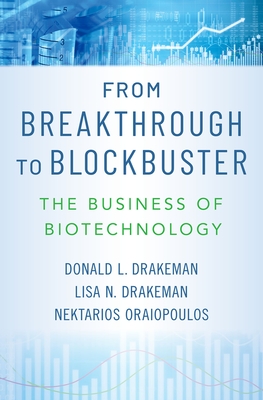 From Breakthrough to Blockbuster: The Business of Biotechnology (Hardcover)


Usually Ships in 3-7 Days
This book cannot be returned.
Financial Times Business Top Title March 2022 How could a large collection of small companies, most with fewer than 50 employees, rise to compete with Big Pharma, one of the world's most breathtakingly expensive and highly regulated industries? Beginning in the 1970s, several scientific breakthroughs promised to transform the creation of new medicines. As investors sought to capitalize on these Nobel Prize-winning discoveries, the biotech industry grew to thousands of small companies around the world. Each sought to emulate what the major
pharmaceutical companies had been doing for a century or more, but without the advantages of scale, scope, experience, and massive resources. Biotech companies have met the challenge by creating nearly 40% more of the most important treatments for previously unmet medical needs. Moreover, they have done so with much lower overall costs. From Breakthrough to Blockbuster: The Business of Biotechnology focuses on both the companies themselves and the broader biotech ecosystem that supports them. It paints a portrait of the crucial roles played by academic research, venture capital, contract research organizations, the capital markets,
and pharmaceutical companies, demonstrating how a supportive environment enabled the entrepreneurial biotech industry to create novel medicines with unprecedented efficiency. In doing so, it also offers insights for any industry seeking to innovate in uncertain and ambiguous conditions.

Donald Drakeman, PhD, was the founding CEO of the US biotech company that pioneered the development of the checkpoint inhibitor cancer treatments recognized in the Nobel Prize for Medicine 2018. These products, YERVOY and OPDIVO, are being used to treat many different forms of cancer. He is a Fellowin Operations and Technology Management at the Cambridge Judge Business School, Distinguished Research Professor in the Program on Constitutional Studies at the University of Notre Dame, and a Venture Partner at Advent Life Sciences. His publications have been cited in numerous patents and by theSupreme Court of the United States. He is a Fellow of the Royal Society of Biology. A graduate of Columbia Law School, he received a PhD from Princeton University. Lisa Drakeman, PhD, was the founding CEO of one of Europe's most successful biotechnology companies. Under her leadership, the company set numerous financing records, including a record setting IPO, and inaugurated research programs leading to the new FDA-approved medicines DARZALEX (multiplemyeloma) and KESIMPTA (multiple sclerosis). She is a member of the board of the Medical University of South Carolina Foundation for Research Development. She has received numerous industry honors, including the Sol J. Barer Award for Vision, Innovation, and Leadership. She has been a faculty memberat Princeton University and regularly lectures on entrepreneurship at universities in the US and Europe. She received a PhD from Princeton University. Nektarios Oraiopoulos, PhD, is the Director of the MPhil Programme in Strategy, Marketing, & Operations and an Associate Professor of Operations and Technology Management at the Cambridge Judge Business School of the University of Cambridge. His research on innovation and R&D management has appearedin the leading journals of the field. He has won multiple awards and has been invited to make presentations at both academic and industry conferences. In addition to his academic work, he has advised entrepreneurial start-ups and has worked closely on research projects with numerous executives fromthe biopharmaceutical industry. He holds a Diploma in Electrical and Computer Engineering from the National Technical University of Athens and a PhD in Business Administration from the Georgia Institute of Technology.